Mom Holds 12 Ounce Baby For The First Time, And Nobody Could Hold Back The Tears 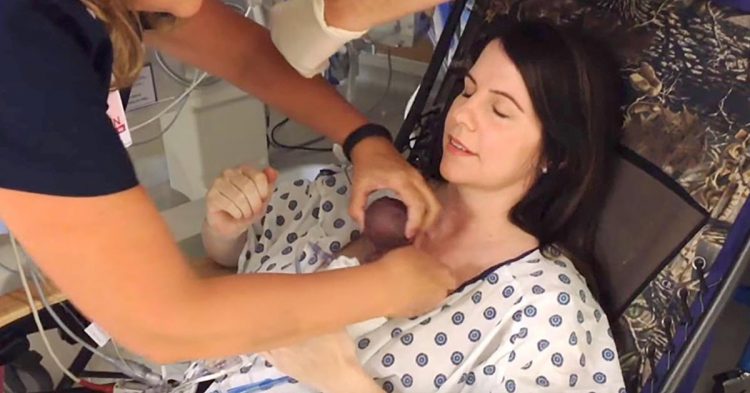 It was a dream come true for Angela Bakker and her husband Michael when the doctor told them the good news. They wanted nothing more than to grow their family, so the fact that Angela had finally gotten pregnant – after so much effort for such a prolonged time – they were ready and eager to welcome the baby to the world. Unfortunately, things did not go according to plan.

Despite how long they had tried to conceive a child, Angela’s pregnancy was exceptionally short – and that was not a good thing. Instead of getting the complete 39 weeks in gestation, the little baby girl, who was named Naomi Joy, came much too early at a worrying 25 weeks along during the pregnancy.

At this stage, Naomi Joy’s chances of making it were slim. Without a moment of hesitation, the doctors and nurses at the Renown Regional Medical Center Neonatal Intensive Care Unit did what they could. They rushed baby Naomi Joy into intensive care and gave her 24/7 treatment and care to keep her tiny heart beating, and her life sustained.

For two weeks, Angela and Michael were deprived of the chance to hold their baby. They were told that physical contact was too risky for the little girl who had hardly developed during her short time in the womb. She was so vulnerable, so fragile, that physical touch could be harmful rather than helpful.

Although “kangaroo care” or “skin to skin,” as some medical professionals refer to it, is usually a very powerful method to create a bond between baby and mom – and even to help the child survive. When the baby is able to feel the touch of its mother’s skin, it can help in the development of the premature baby – or any baby for that matter. Skin to skin is a simple but very effective method to help development.

When Naomi Joy was born, she weighed less than a pound. She topped the scales at just 12 ounces. But after two weeks in the NICU, doctors believed that Naomi Joy was in good enough condition that she could come out of her bubble and receive the loving touch of her mother and father. And when Angela and Michael were given a chance to do that, their world changed forever.

As it turned out, Naomi Joy beat the odds. Not only did she survive, but she has also been dubbed Renown’s “miracle baby.”

“She is happy, just so happy, she laughs, she plays,” Angela said. “Just watching her bloom and thrive has been amazing. There are days when you just look back on her photos when she was born, and it’s hard to imagine, and you look at her now, and you’re like you’ve come so far.”

When the time came for Naomi’s first birthday, Angela and Michael brought her back to the hospital to see the people who helped her survive her first 142 days in the Renown NICU.

Carrie Archie, a Registered Nurse at Renown, “She’s amazing, she’s just a happy little baby, and that’s kind of why we do what we do.”

What do you think about this miracle baby?