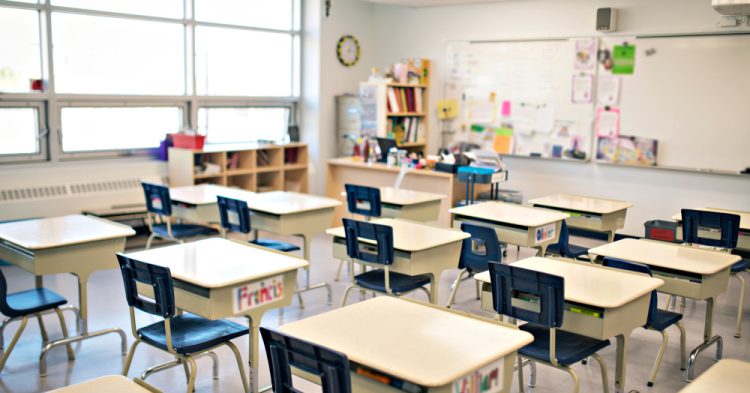 Substitute teachers do not have an easy job. They have to try to follow another educator’s lesson plan while managing classroom behavior and keeping children in line. But during a recent day in a Las Vegas fourth-grade classroom, one substitute teacher went too far when they taped a face mask to a child’s face in front of other students who began laughing at him.

The boy’s mother has since been enraged by the incident. She claims that the teacher did this to her boy at the Reedom Elementary School in Mountain’s Edge, Nevada, according to her statement to KVVU-TV. Critics fear that educators are resorting to drastic measures to promote safety in classrooms as parents and teachers deal with the Delta variant that continues to kill Americans and make thousands of people sick.

Although the mom has asked to remain anonymous, she wants every detail of the incident shared with as many people as possible. She fears that if the country knew her name and identity, her son, who is already struggling too much in fourth grade, would suffer additional embarrassment and possible harassment from other students in his class.

“He went to get a sip of water, forgot to put the mask on,” she said. “The teacher did not tell him to put it back on or send him to the office. She instead pulled him up in front of the classroom in front of all of the students. She then taped the mask across the top of his face.”

However, her son told mom something that made her even more concerned. Apparently, teachers had been taping masks to children’s faces since the beginning of the school year to ensure the safety of students and staff.

Mom could not believe that her son had to deal with getting his face mask taped to his face. As she listened to her son tell her about the incident, mom gathered that the educators were taping the masks to children’s faces as a way of punishing them and making the children feel shame over failing to wear their masks safely and effectively.

“I was furious, furious,” she said. “I was scared for my son on what kind of long-term effect it is going to have on him socially, the fact that the entire class was laughing. … He was crying. He was humiliated.”

Mom approves of face masks and believes they help save lives from COVID-19. However, she does not like how the teacher used tape to keep the mask on her son’s face.

According to the news outlet, the mom filed a police report and might take legal action against the school if the teachers do not stop taping children’s masks to their faces.

“It’s crazy. Corporal punishment in schools should not be happening,” she said.

Although mom claims that teachers are taping masks to children’s faces all willy-nilly, the school district told KVVU that it was an isolated incident. Their official statement was: “The district is aware of the isolated incident and is dealing with the employee through the proper channels. The principal proactively notified the family of the investigation.”