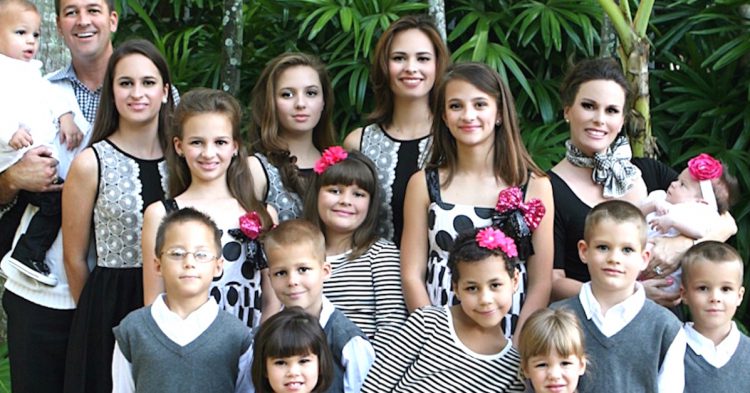 By the time Lyette Reback turned forty, she had the family of her dreams. She was the proud mother of fifteen children and had just received the good news all over again – she was pregnant with her sixteenth. Not only is Reback a certified super mom, but she also raised all fifteen children as a stay-at-home mother and even homeschooled them all because she loved her children so much.

When Reback was a little girl, she never had any brothers or sisters. She was not the type to fawn over other little children and begged to work as a babysitter. She had never even changed a dirty diaper. But she always knew that when she became a wife, she wanted to have a big family. And not just a five or six-member household, but one so big that people would gawk at them.

When Lyette was nineteen-years-old, she met her husband, David. Ten days after meeting, they married, and two years later, Lyette was pregnant with their first child. For the next two decades, she would continue to have child after child until the Palm Beach couple had a family that included six boys and nine girls. Eleven of the children were biological, while the other four were adopted.

Friends of the Rebacks thought they were insane. Strangers found them bizarre and scored at the idea of raising such a large family. Who can afford it?

But Reback loves being a dedicated mother and caretaker of her family. She takes her kids to eighty-eight sports practices each week and completes forty-two loads of laundry. The family spends $650 per week on groceries, which includes twelve gallons of milk, one hundred eggs, and fifty pounds of chicken.

Although they have such a massive family, their living space is only a three-bedroom home. And from that tiny space, Lyette Reback homeschools all of her children. While she admits being a super mom is the “best job in the world,” it is also extremely challenging.

“If I had known then that by the time I was 40, I would have 16 kids, I would have thought it was crazy,” she said, according to Daily Mail. “If the number of children we have comes up in conversation or people see us out, and they don’t know our family, they are like, ‘holy mackerel.’

“At first, when there were four or five little girls, it was, ‘Oh my gosh, you are crazy, how are you doing that?’ People would joke or say things like, ‘Don’t you have a TV in your bedroom?.’

“Obviously, these remarks were either out of incredulity, or they proposed my ignorance, but I am not stupid. Now some of them are a bit older, and they are doing well in life it seems it’s less of a freak show, and they are saying, ‘Oh, maybe you’re not a weirdo.’”

Lyette has since given birth to her tenth daughter. And the family is as large as ever. But are the Rebacks done growing their family? Only time will tell.