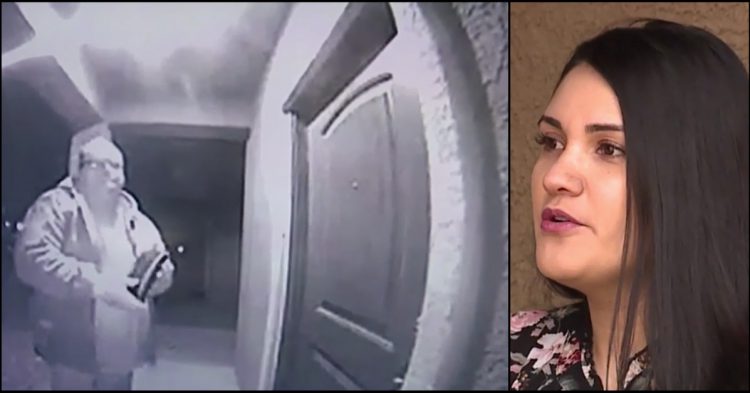 In the middle of the night, Pua Valdez was awoken when her doorbell started ringing. The young woman had a doorbell camera installed on her property, so she was able to see a man standing outside, asking to have the door opened for him. But Pua was not one to trust just any random stranger who came up to her door at 12:30 am – but once the man uttered four undeniable words, she rushed to unlock the door and provide the stranger with shelter.

As it turned out, the man outside was Billy Bird. He worked as a driver for the Lyft app and happened to find someone’s wallet at a local Walmart location. Although the wallet was loaded with cash – it contained at least $400 in paper bills – Billy Bird was not going to take it for himself. Instead, he was determined to return the wallet to its rightful owner after he came upon it forgotten in the Walmart grocery cart.

Billy opened the wallet just to see who it belonged to. Although he was searching for the driver’s license, he found a lot more inside than just that. Besides the numerous credit cards, gift cards, and $400 in cash, Billy did find the license with the info he wanted.

However, Billy was not able to drop everything and return the wallet to its owner. First, he had to get back to work as a Lyft driver. Those apps demand a lot from their non-employee workers and do not afford them the same luxuries employees at other companies get.

By the time Billy was able to take a few minutes off his Lyft shift, it was late at night. Nevertheless, he did not want to end the day without trying to return the wallet he had found hours before at Walmart. He decided that it was now or never, so he plugged the address on the driver’s license into his GPS and drove over to Pua Valdez’s home.

Billy rang the doorbell again and again, but Valdez just did not open the door for him. He understood. It was late at night, and he was not someone she knew.

Because no one was going to open up for him, Billy had to leave the wallet somewhere near the doorstep. He realized that there was a doorbell camera, so he spoke directly into its microphone and said the words that Valdez was waiting to hear all night. The first four words were all that Valdez needed to hear to know that she could trust Billy Bird like a friend.

“I found somebody’s wallet that lives at this address, and I just want to leave it here at your front door.”

Eventually, Valdez shared this story with her local news network. They helped her track down Billy Bird and reunited the pair. Now, Valdez was able to give Bird the recognition he deserved for going out of his way to be a Good Samaritan – and Billy Bird could rest easy knowing that he did the right thing that late night.