Mom’s Two Sons Were Uncontrollable On The Plane. A Stranger Finally Stands Up And Interferes : AWM

As a parent, few things are as embarrassing as when children act out in public. Because it makes people think you’re a bad parent who can’t control your children, little ones throwing temper tantrums make for very bad times out in public. But if you’re stuck on a plane or in a train where you have nowhere to go to get some privacy, a child throwing a temper tantrum goes from being bad to being a nightmare rather quickly.

Although people might judge parents when their children are acting out, most parents will sympathize because it can be very difficult to control a little child, especially when they’re under the age of two. Often in those cases, there is nothing for you to do except hold them and try to soothe them. But that doesn’t always work. 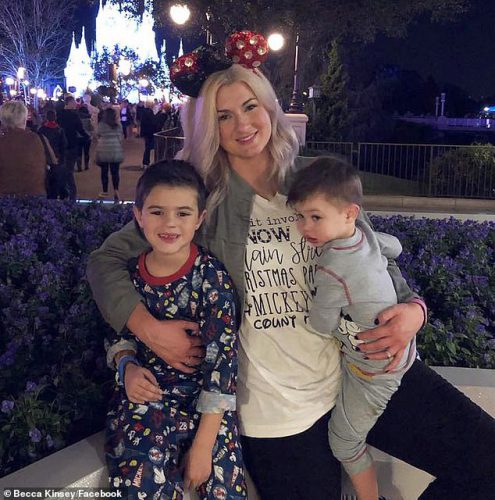 A young mother has come forward to share her story about how three women, all strangers, offered their help after her two sons started acting out on the plane. The young mother, 31, was all alone on the flight and had no one to help her deal with her misbehaving boys.

When Becca Kinsey from Dallas, Texas booked her ticket, she knew that she wouldn’t have anyone with her to help. But she hoped and prayed that her five-year-old and two-year-old boys would be angels for her on the flight. She couldn’t have been more wrong.

Her older son, James, pretended to be “exhausted” so he was unable to help Becca deal with her “screaming” son Wyatt. At that point, another mom in line moved over so Becca could go first. She had sympathy for her because she knew her toddler son was being unbearable. 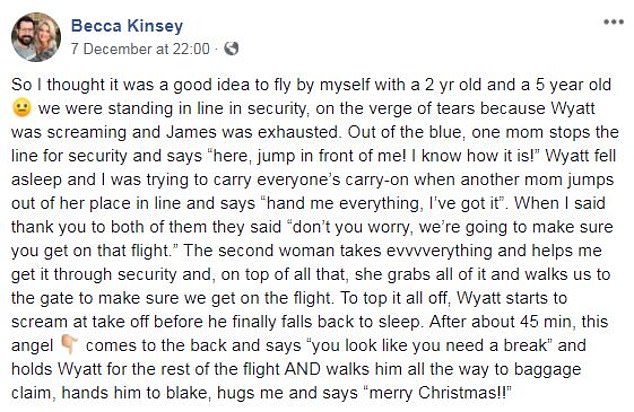 “We were standing in line in security, (and I was) on the verge of tears because Wyatt was screaming and James was exhausted. Out of the blue, one mom stops the line for security and says, ‘Here, jump in front of me! I know how it is!”

After that disaster, another mom stepped over to help Becca. She grabbed her bags and helped carry them to her gate. But the heartwarming interventions did not stop there. A guardian angel appeared during the flight and helped Becca deal with her out-of-control son once more.

“Wyatt starts to scream at takeoff before he finally falls back to sleep.” 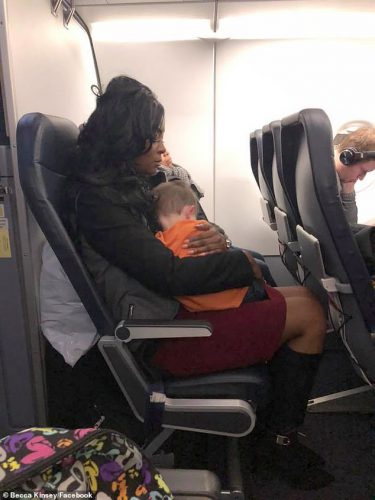 But the respite is not meant to last.

When he wakes up, he loses control and begins screaming and crying. That’s when another woman rushed through the aisle to give Becca a break. The distraught mother was all too happy to hand over her crying son to the strange woman because she was “on the verge of tears.” Her sons were making travel so difficult for the 31-year-old mother.

Becca wrote, “After about 45 mins, this angel comes to the back and says, ‘You look like you need a break’ and holds Wyatt for the rest of the flight and walks him all the way to baggage claim, hands him to Blake, hugs me and says, ‘Merry Christmas!’”

Becca’s heart was touched by these generous women.