More And More Parents Are Giving Their Babies “Knockout Bottles,” But Doctors Want Them To Stop : AWM

More And More Parents Are Giving Their Babies “Knockout Bottles,” But Doctors Want Them To Stop 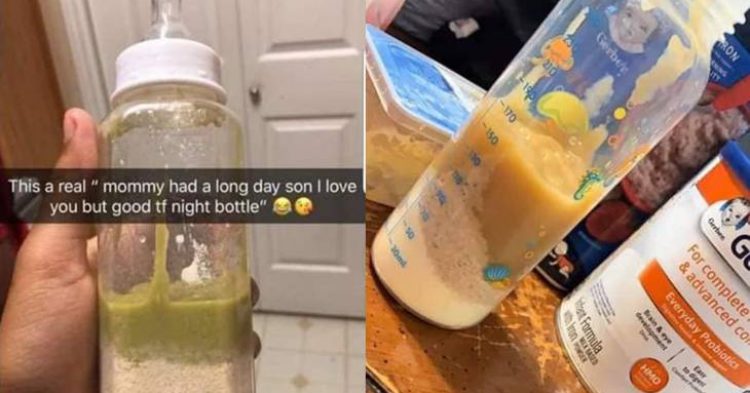 Every year, parents try to come up with “creative” solutions to solve an age-old problem – getting kids to go down for bedtime. Although parents want nothing more than a few hours to relax at the end of a busy, all too often children refuse to make bedtime easy and even resist sleep until everyone in the house is tired and frustrated – that’s why more parents than ever before are creating DIY concoctions designed to knock out their little ones so parents can get some “much deserved” me-time.

Although parents may think they’re using harmless chemicals and substances in their so-called “knockout” bottles, doctors want to reiterate that these concoctions are anything but safe. While these bottles often contain a cocktail of baby food, infant formula, baby cereal, Tylenol, or melatonin – all of which are ingredients that can be safe on their own – they are not always safe in combination. And melatonin and Tylenol can be dangerous when given to very small children, especially if dosages are not monitoring very closely. Although doctors do not advise parents to give their children these “knockout” bottles, the concoctions work to put the children to sleep faster, which makes more and more parents eager to create their own bedtime cocktail to make their little one get more shuteye every night.

Moms and dads have been sharing images of their knockout bottles on social media. Because these platforms have been flooded with images of these homemade concoctions, parents assume they’re safe to administer at home without a doctor’s order. But they’re not. And now doctors are stepping up and joining the conversation, trying to warn parents before they do something they may regret.

New York mom Alexis Delaney is sometimes credited for being the person who created the dangerous trend that puts baby’s lives at risk. Although Delaney has tried to distance herself from these knockout bottles by deleting the original post, people know it was her who first posted about it, and they’re not going to forget.

“Y’all parents today! Don’t know these knockout bottles!” she wrote back in November 2019, launching a dangerous trend among parents. “S**t worked every time. Especially when (the baby) is sick, add some Tylenol. Aww. man out like a lite.”

Because Delaney’s dangerous advice seemed likely to work, parents picked it up and ran with it – despite it going against what doctors would recommend. Another mom, Maya Elizabeth, began to start heavily promote these knockout bottles. She urged other parents to try it along with her, so she wouldn’t be the only one putting the child in danger.

People, including doctors, were quick to point out how dangerous these knockout bottles can be.

“Any mother who does this to ‘knock their baby out’ so they sleep longer shouldn’t be a mother,” one person wrote. “Sleep is developmental, and even as adults, a very high percentage of us don’t sleep through the night for reasons other than our infants waking. It makes me sick to my stomach to see that mothers are actually doing this to selfishly get a few extra hours of sleep.”

What do you think about these knockout bottles?