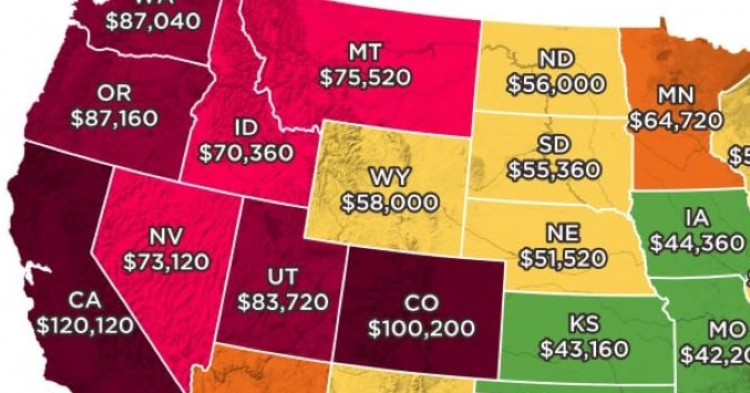 The cost of living in your state determines whether or not you live like a king/queen or a pauper. Because some states are a lot more affordable than others, people can get by on lower salaries and still live in homes that resemble mansions. If you’re stuck in a small apartment despite making a decent salary, then this map may help you find a better place to live so you can enjoy the luxuries of having more money at your disposal.

The map included below from HowMuch.Net details the average salary you would need in order to afford an average house in the state. As you can see from the map, some states make it a whole lot easier to buy property than others. But those states might not be as desirable as others as places to live or raise a family. 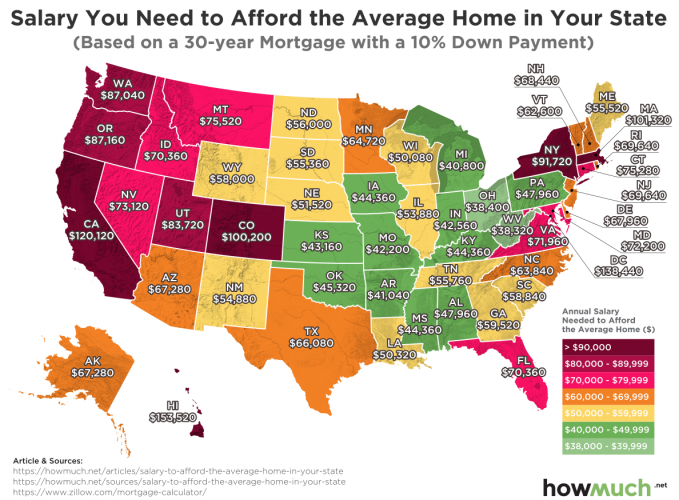 Some states are a whole lot more expensive than others. For example, Hawaii requires residents to earn as much as $153,000 per year if they want to own an average-priced home on one of the islands. California is also extremely expensive, with the average salary of $120,120 required of residents if they want to be proud owners of land or property.

Meanwhile, states like Ohio and West Virginia are extremely affordable for people. West Virginia, which has the lowest salary requirement of any state in the Union, is listed at $38,320, while Ohio is a near second with a required salary of $38,400 in order to purchase a home in the state.

Other expensive states include Massachusetts, which has a salary requirement of $101,320, and Colorado, which requires residents to earn as much as $100,000 per year if they want to own a home. New York state is also an expensive place to call home, with the average salary for those who want to own property being $91,720.

So, what does this map mean for you? If you’re looking to move to states and want to find a place where your salary will go further, then you should consider heading to one of the more affordable states like Ohio or West Virginia. But if you have your heart set on living in a certain state, then be prepared to earn a higher salary so you can afford to own a property.

Do you think this map is accurate? Let us know in the comments below! And be sure to check out HowMuch.Net for more maps and data visualizations like this one if you’re looking for a new state to call home.