The world-famous Vagina Museum in London refused to use the word “woman” when tweeting about abused women from Poland. The organization chose to use the phrase “people with vaginas” instead of women because of internal tensions. Since the organization skirted the controversial term “women” when composing their tweet, the Vagina Museum has come under attack from critics and online trolls over the “ludicrous” decision to delete the common word from their vocabulary.

The group handed over access to their Twitter account to Aleksandra Karpowicz, who was prepared to talk about the horrible situation women in Poland are dealing with. Because Poland changed their abortion laws, women and men have organized demonstrations to share their discontent. 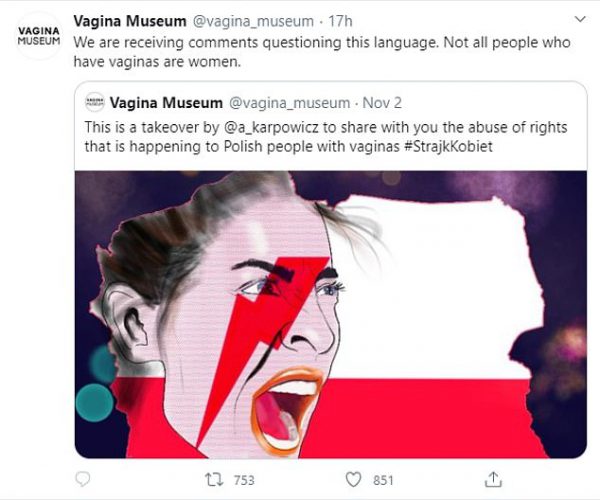 The group tweeted, “This is a takeover by Aleksandra Karpowicz to share with you the abuse of rights that is happening to Polish people with vaginas.”

The group followed up that controversial tweet with another explaining the reasoning over the language. “We are receiving comments questioning this language. Not all people who have vaginas are women.”

Although the Vagina Museum organization stands behind their decision to refer to those affected by the changes to Poland’s abortion laws as “people with vaginas,” the whole of social media is not pleased.

“The world has gone mad,” exclaimed one outraged viewer, adding, “It would appear that, despite being a woman (and having a vagina), the Vagina Museum has no interest in my concerns about the name ‘women.’”

“It’s difficult to think of anything more ludicrous than a vagina museum that refuses to use the word woman. It’s utterly pathetic. All vaginas are female. By the way, surgically inverted penises are not vaginas, no matter how much tier owners like to pretend otherwise.”

However, some people were supportive of the language because it has to do with transgender rights.

“Thank you for using inclusive language. I am a cis woman, and I really appreciate having my trans and nonbinary siblings being recognized as being damaged by this horrific law too. We all need to stand together.”

Another wrote, “No, not all vaginas are female. Not all people who experience periods are female. Why does it matter so much to you to tell people what they are and aren’t allowed to be? You’d be much happier if you left people to it.”

J.K. Rowling has taken issue with a similar comment about “people who menstruate.” She felt that the term for this should be “women” for the same reasons as those who criticized the Vagina Museum’s tweet.

“If sex isn’t real, there’s no same-sex attraction,” Rowling wrote. “If sex isn’t real, the lived reality of women globally is erased. I know and love trans people, but erasing the concept of sex removes the ability of many to meaningfully discuss their lives. It isn’t hate to speak the truth.”