Nobody Believed Him When He Explained What He Found In The Drainage Ditch : AWM 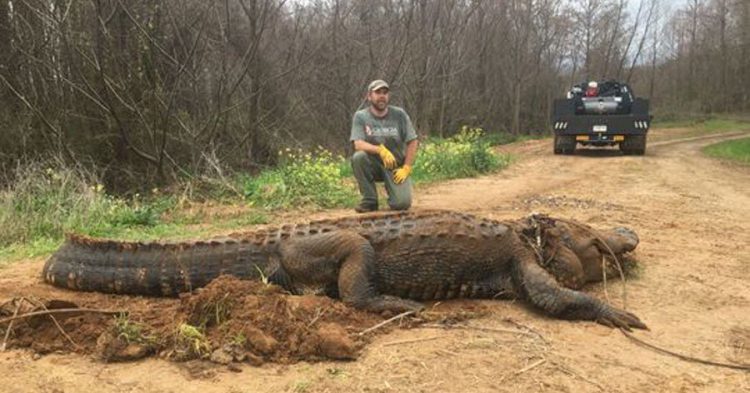 An image for the Georgia Department of Natural Resources has people scratching their heads. The photo, which was snapped by wildlife biologist Brent Howze, on February 18, 2020, shows the scientist with a “massive” alligator, which measured 13 feet and 4 inches long and weighed a shocking 700 pounds. When Howze came upon the gator, it was nearly dead and located in a ditch along Lake Blackshear near Albany, Georgia.

The gator was very old, which was obvious the how large it had gotten during its life. It had a chest girth of 57 inches. By the time Howze happened upon it, it was on its last legs. But the creature was not dying from natural causes. Some criminal pumped the massive gator full of bullets.

“It was a very old alligator in poor body condition with what appeared to be gunshot wounds,” Howze told the Cordele Dispatch. “It was an unfortunate situation, but the best thing for the animal was to put it down.”

He added, “It took a while to get it out of that ditch. It was bigger than we originally anticipated, and we had to use heavy equipment to move it.”

Because the criminal illegally pumped the gator full of bullets, the 700 pounds alligator had to be put out of its misery.

DNR spokesperson Sarah Hanson admitted that the gator was large, but it was not even the biggest one on record. The Peach State has a lot of big gators strolling through the state. Some of them love to hang out near habited areas.

The biggest one that Hanson knew about was fourteen-feet and one-inch long. That massive creature was found back in 2015 and rocked the world.

Hanson verified that the photo of Howze with the large gator in the irrigation ditch was completely real. Critics and conspiracy theorists from the Deep South and out west were questioning its authenticity. Howze agreed with Hanson’s assessment and assured the public that he really did kneel next to the large gator.

“Apparently, a lot of people think it’s fake, but I can assure you that it’s not,” Howze told the Cordele Dispatch. “I’m the one in the picture, and you can probably tell that I didn’t get too close to it.”

Although Georgia is filled with a massive gator population that likes to stay in local waters near residential areas, Howze thinks people worry too much. He said they don’t pose a real threat to humans unless they are provoked.

“There’s only one way for an alligator to live this long, and it’s by avoiding humans,” he said. “I’ll be in the water at Lake Blackshear this summer for sure.”

Howze doesn’t think people need to fear Lake Blackshear despite its population of large gators. He thinks that people are safe because these gators want to avoid people. It’s how they survived for so long. Hopefully, Georgia is able to educate people not to harm these large gators, especially since they’re not very dangerous to people.

What do you think about the image of his massive gator?