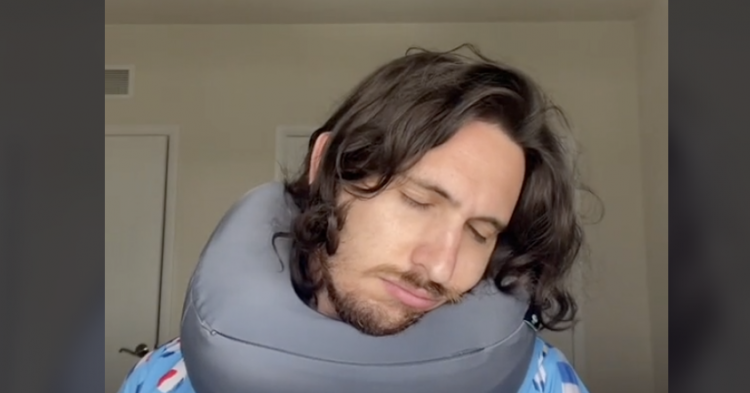 TikTok floods the world with information every day. But there is one trend that has risen above the rest because it has proven shocking to millions of people. The clip that sparked it all was uploaded by TikTok user @sidneyraz, who promised to inform the world about the “real” way to use an airplane pillow. When the social media user shared the video with the results, viewers were admittedly blown away by the correct way to use the travel pillow while on an airplane.

“You can actually sleep on a flight,” the TikTok user promises viewers in the caption of his viral post. The video shows him wearing a blue popsicle shirt as he shares his innovative trick to wearing a travel pillow the right way while on a flight or during any form of lengthy travel like in a car for a road trip or aboard a train.

“Travel pillows go in front,” the TikTok user said in the video. He snaps the pillow in place behind his neck and then collapses to sleep in the quick video. “I’m so comfy.”

Users inundated the comment section with their reactions and thoughts. People really wanted to get a conversation going around travel pillows and the correct way to use them while on a plane.

“This is probably why I have always found them to  be uncomfortable.”

“The person that invented them seeing every single person using them the wrong way.”

“This makes so much sense. Why am I SO shocked?”

“Yep,” wrote one user. “At the back, they push your head forward in a weird position, and if you are short and the headrest is formed, it is worse.”

“I’ve never seen anyone do that. It might work, though. Being a minimalist, I travel through Romania to London to CA to the US with no baggage. It works.”

“I just used a travel pillow in front like that and felt so ridiculous! It looks like I was right, though.”

One person suggested a slightly different way to wear the travel pillow.

“I put mine in front but to the side that my head is resting. So comfy!!”

One person could not believe that she had been using travel pillows the wrong way her entire life. She wrote, “Don’t the tags on them show them being used behind your head?”

Her comment was inundated with more than one hundred replies.

“We’ve been using bobby pins upside down for God knows how long. So I’m not overly surprised.”

As promised, the video was part of a trend that had people sharing things they wished they had known before turning thirty. There were a lot of people who agreed that the right way to wear a travel pillow was something they wished they’d known before entering the third decade of their life.

“I knew something wasn’t right when I put it behind me,” wrote one woman.

“Why am I only finding this out now?” lamented another.

“What?? I was TODAY (38) years old!!!” wrote one indicating the age she was when she learned the true way to use a travel pillow.

How do you use travel pillows?