Officer Tells Mom To Pop Trunk Because Brake Light Is Out, Has No Idea She’s Recording Him 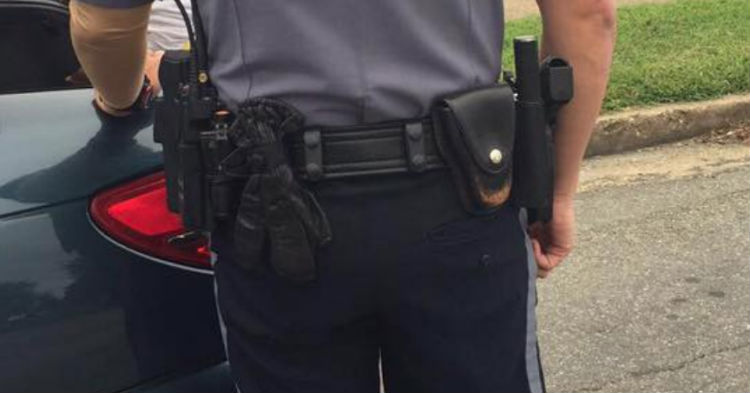 Although thousands of police officers now wear body cameras to track their movements and interactions, citizens still take out their cameras to grab evidence of their own. When people are worried that they’re about to be mistreated by the cops, they take their phones out and start recording. Sometimes they do this visibly so the police officer can know they’re on camera. But in the instances we’re about to describe, a woman secretly filmed a police officer pulling her over for a routine traffic violation.

And what she gets on video has the internet beaming.

When Officer Jenkins pulled Chy-Niece Thacker over for a busted taillight, he could have issued her a ticket. It was a traffic violation after all. Instead, he offered her some thoughtful advice. And it made Thacker’s day.

As soon as Thacker noticed that a police officer was flashing her car to pull over, she started to freak out. She began fumbling for her license and registration and couldn’t find it fast enough to greet the cop with it when he got to her window.

Then he said something she didn’t expect.

“Don’t worry about pulling anything out. I just want you to know that your brake lights are out.”

Thacker was driving to a job interview. Getting pulled over made her risk being late. It was the last thing she needed on a day like today.

But when Officer Jenkins told her about the issue, she was stumped. She had paid a body shop to replace your brake lights last month. How could they already be busted?

Thacker told Officer Jenkins how Firestone charged her $600 to test the wiring of her car. He was shocked. So he asked Thacker to pop her trunk. He wanted to check it out for himself.

A bit of a car aficionado himself, Officer Jenkins started fiddling with the brake light. He wanted to see why they were not working. Perhaps, he thought, he could serve this woman and help her be safer on the road.

While another cop might have issued her a ticket, Officer Jenkins wanted to help her. He understood that she didn’t mean for the brake light to be out. Firestone had ripped her off.

Instead, he went above and beyond to offer Thacker help. She was touched, so she snapped a picture and posted it online.

“He is a blessing,” she wrote on Facebook about Officer Jenkins.

As thousands read her story, it went viral. More than 388,000 likes and 91,000 shares later, people were overjoyed to hear about the officer’s kindness.

She described the incident online. After he checked in the trunk, “he told me to pop the hood to check the relay box then asked me to get out to check the other one. He could’ve easily given me a ticket, but Officer Jenkins stepped out of officer role and into mechanic role to make sure I was straight.”

Sometimes people forget, but police officers are human, too. Moments like this remind everyone how kind 99.9 percent of them are.