Outrage At Grandmother Who Hung Her Grandchild Over A 50ft Balcony To Save Her Cat : AWM 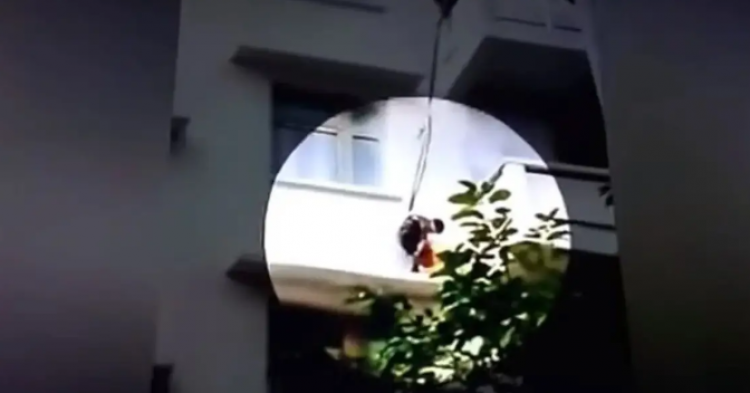 When the child’s parents asked the grandparents to watch her seven-year-old son for the day, mom figured that the little boy was in good hands. Unfortunately, many grandparents do not remember how to interact with children since it has been so long since they’d had the opportunity to do so safely. And that point could not have been illustrated better than by what this grandmother decided to do to her grandson.

However, the grandson did not behave as well as he was supposed to. Perhaps, that was because the grandmother gave the little boy way too much candy. Perhaps that was because he played too much with her cat. The little boy got on the cat’s nerves, which made the feline jump out of the window to its favorite hiding spot. Unfortunately, this infuriated grandma who demanded the boy put his life in danger to save the cat.

The grandmother could not believe that her grandson would do that to her cat. That’s why she demanded that not only he apologize for his crime, but figure out a way to save the feline from the ledge beneath the grandmother’s window.

Because the boy was just seven-years-old, he didn’t know what to do to save the trapped cat. The only idea he could come up with was a move that he’d seen in the movies. The grandmother agreed that his plan might work as she did not want to include the police.

The plan scared the boy. But his grandmother insisted. She said that everything was all right and that he wouldn’t die. She tied his backpack to a rope and then slowly lowered the boy down the fifty-foot balcony toward the trapped cat.

Although the boy was willing to risk his life to save the cat, the cat did not care for the boy at all. The boy was the cat’s arch-nemesis and the reason he had fled off the balcony in the first place. Why would the cat willingly come with the boy whom he did not trust? This added a complication to the already challenging situation.

Bystanders caught the dangerous situation on camera. This has caused the incident to go viral. People could not believe that a grandmother would put her grandson through this ordeal.

The grandmother, despite being caught putting the child’s life at risk, believed she did not do anything wrong. However, the police thought otherwise – and the boy’s mother had to agree with the cops.

What do you think about this moment? Should the grandmother have used her grandson to retrieve the cat like that?