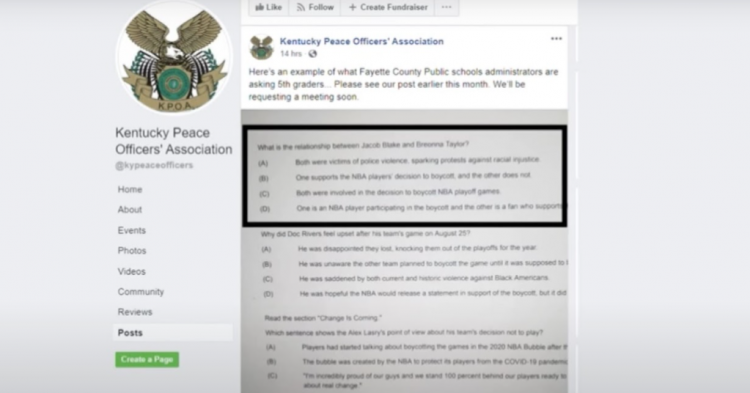 The Kentucky Peace Officers’ Association is up in arms after a teacher assigned a class of fifth-graders a quiz. The group took a snapshot of the quiz and shared it on Facebook, where they hoped it would spark controversy. The Association got exactly what they wanted because many other locals in Kentucky were just as furious as the Peace Officers and were eager to see what the Fayette County (Kentucky) Schools had to say as a way of explanation.

One of the questions on the quiz was: “What is the relationship between Jacob Blake and Breonna Taylor?”

The first answer available to students is, “Both were victims of police violence, sparking protests against racial injustice.”

Although LEX 18 asked KPOA for an interview, the group refused. Instead, President Chip Nowlin sent a statement that declared:

“While it is the responsibility of educational leaders to shape the future, it is not their right to do so in a manner designed to intentionally and negatively influence young minds and promote an apolitical agenda.”

Lisa Deffendall, a spokeswoman for the Fayette County Schools district, said that the question was taken out of context. The school district said that they pulled information from a website called Newsela and did not mean any type of ill-intention behind the quiz for the children.

The school wanted to discuss the police violence against Black Americans and see if the young minds of Kentucky’s youth could come up with any solutions to the epidemic. The school district wanted their students to be smart and capable of engaging with the current events of the day in a meaningful and powerful way.

However, the KPOA took the statement personally. They claimed that these statements about the police shootings of Breonna Taylor and Jacob Blake were “biased and incendiary” and needed to be blocked from the minds of the young children of Kentucky.

“When our educators are designing curriculums based on what a media company reports with no other facts, and using wording designed specifically to mold negative opinions of anyone wearing a uniform, we have a problem. As the Commonwealth’s oldest professional organization of law enforcement officers, the KPOA will continue to speak out in support of all the dedicated public servants who run toward situations when everyone else is running away.”

Following the KPOA’s outrage over the quiz for the fifth-grade children, Kentucky Department of Education representative Toni Konz Tatman confirmed the KDE met with Nowlin over his concerns and that the school will address systemic factors and the traumatic impacts of race-based inequality in America, especially as it pertains to the students, staff, and faculty within Kentucky.

Tatman sent Nowlin an email, but he has not replied. She stated that ignoring the problem of police brutality is no longer an option for Kentucky children. Breonna Taylor was a Kentucky resident when she died from an interaction with the police.