Photo Of Man Using Body To Shield Stranger From Vegas Shooter Went Viral, Then We Learn His Identity : AWM

Photo Of Man Using Body To Shield Stranger From Vegas Shooter Went Viral, Then We Learn His Identity 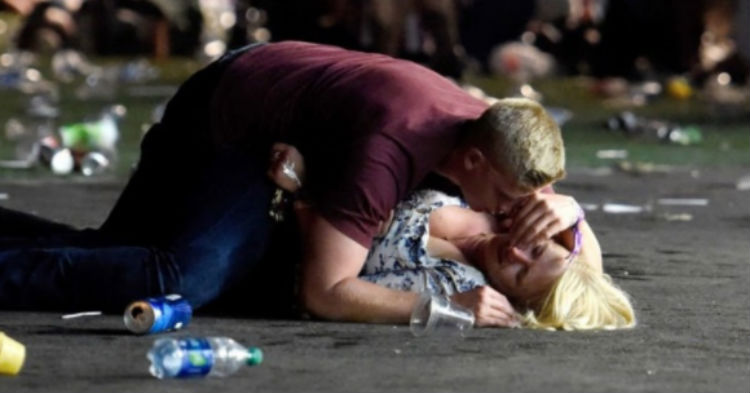 Among all the horrible photos and videos that were captured during the shooting in Las Vegas, U.S. Army soldier Matthew Cobos was seen shielding an innocent woman from the gunfire. As Stephen Paddock, 64, rained bullets down on the innocent country music fans, the concert goers fled in a panic. But Cobos remained calm and tackled a woman to the ground in a bout to save her life.

Because Cobos had military training, he knew to shield the woman with his body. And he also knew to cover her eyes because he didn’t want her to see the carnage going on around them. When the photo was first shared online, no one knew who the man was. But after the image went viral, Matthew Cobos came out to tell the world that he was the man who shielded the innocent woman during the bloodshed.

As the world cried over the destruction and death Paddock caused at the Route 91 Harvest festival, the image of Cobos protecting the blonde woman went viral.

Cobos did what he was trained to do – protect innocent Americans from terrorists like Paddock. As the murderer shot thousands of rounds of ammunition upon the crowd of 22,000 music lovers, he had little regard for human life.

Cobos on the other hand still had hope. And as he shielded the young woman from the bullets, he kept her eyes covered. He didn’t want her to have nightmares from all the dead bodies and blood around them.

Moments after the photo was taken, Cobos led the woman behind a nearby car where they sought protection from Paddock’s bullets.

After rescuing the woman, Cobos then used his belt as a tourniquet to help curb the bleeding other victims had. Beyond that, he also used his fingers to block bullet holes and prevent bleeding. He was a true hero when duty called.

Since the nightmarish country concert, Cobos has told his close relatives and friends that he heard bullets ricocheting off the ground. Paddock was aiming for him, but the Army soldier managed to evade the murderer’s bullets.

As you can imagine, this image has stirred up a lot of emotions for people across the internet. Here were a few shared on MailOnline.

“To him and anyone else who showed bravery of the highest level that night, medals of honor should be given. And knowing Trump, I bet he will be happy to do it.”

“I’ve been worried about these two… thought they were a couple… he is a brave and lovely person… and a credit to his unit and his country… and he deserves a medal… So very, very, very happy to know they both got out alive and safe.”

“Not all young people are bad, as an example of this selfless courageous international hero! This young man deserves true accolade for his incredible bravery, so never mind all these celebrities getting awards for play acting!!!”

Watch the video below to get the full story!