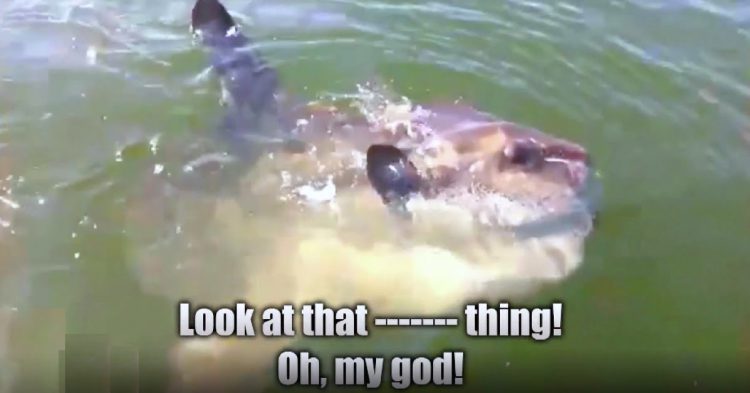 Off the coast of Cape Cod, Massachusetts, a sea monster is terrorizing boaters. Although people keep calling the police and national guard to help deal with the massive beast, cops are begging the public to stop calling about it. The police know about the massive sea creature swimming near the town of Wareham and are committed to doing nothing to stop it – but there’s a good reason for their non-action.

Locals who have spotted the creature were terrified. The underwater animal was so big and scary that they thought it was some type of shark – or maybe a sea creature that had yet to be categorized by humans. These people kept their boats a safe distance from the animal in the unlikely case it launched an attack on their boat or tried to leap from the water to bite them. With so many reports of sharks lurking off the coast of Cape Cod, locals are terrified and are not willing to take any chances with their lives.

The Wareham Department of Natural Resources received tons of calls about the sea monster. Because it is their job to make sure nothing fishy is going on out in the water, they launched an investigation to find out what big sea creature was terrorizing local boaters. What they found is startling.

Marine experts were able to identify the strange creature. It was a sunfish.

Although these animals are mostly harmless, they’re massive. These creatures can grow to be eleven-feet long and weigh about 5,000 pounds!

According to the Cape Cod Times, “[Sunfish] have a tall dorsal fin that can conjure the John Williams theme from Jaws when spied by nervous swimmers. However, they tend to swim on their sides, so the dorsal will come in and out of the water as they navigate about. So when the dorsal fin goes up and down, it’s not a shark. Sharks swim straight ahead with dorsal remaining above water.”

Because of all the calls from concerned residents of Cape Cod, the Wareham Department of Natural Resources address the public’s concerns on Facebook. They wrote:

“We have checked on it, and it is doing normal sunfish activities. It’s swimming. It is not stranded or suffering. The sunfish is FINE. Don’t be jealous just because it is not swimming weather anymore!”

Then the department urged locals to “PLEASE STOP CALLING THE POLICE DEPARTMENT ABOUT THIS SUNFISH!!”

In the video below, provided by Inside Edition, you’ll see the reaction of two men who spotted the sunfish in the water.

Fans of the program shared their reactions to the video clip on YouTube.

“After this video, either I live under a rock, or these guys’ exaggeration level is on point!”

“I was on a whale watching tour in California, and we saw two of those sunfish, and the captain immediately said no worry’s there only a sunfish, and he gave us a bunch of facts about them. The reaction of those guys on the boat when they saw it was pretty similar to mine.”

What do you think about the Cape Cod sunfish?