Police Are Looking For The Person Who Keeps Putting Cowboy Hats On All The Pigeons : AWM 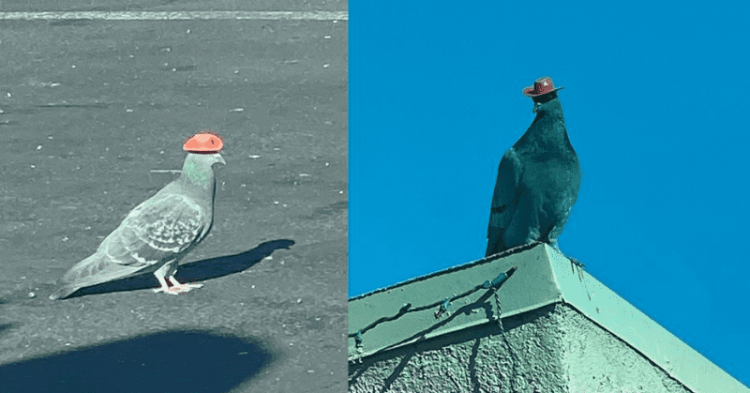 A Las Vegas prankster is making headlines. They keep putting tiny cowboy hats onto pigeons. And while the result is absolutely hilarious, animal rescuer workers are being forced to put in extra overtime hours to save all the birds from the “abuse.” Although the internet loves the images of the cowboy-hate wearing pigeons, local animal rescue organizations, and pigeon advocacy groups (yes, they exist!) are outraged and believe the hats could cause lasting damage to the birds and the public’s perception of them.

While no one knows who is putting the tiny hats onto the pigeons or why people are in love with the prank, but the animal rights groups are not happy about it, and they’re the only ones.

According to Fox, one local said that the hats are a result of the fact that “the rodeo is in town,” which could indicate it is a stunt performed by the publicity team of the rodeo. Unless they were just joking…

Robert Lee said, “That’s the only explanation I have.”

“I saw something red on the pigeon’s head and looked down at these awesome things.”

He uploaded the viral video to Facebook, captioning it with: “Just another day in the neighborhood.” And in Las Vegas, such a reality isn’t anything but an average day.

Although the general public finds the hats adorable, a pigeon advocacy group, Lofty Hopes, has expressed their serious concerns about the miniature cowboy hats on the birds. Because someone has to hold down the pigeons while adorning it with the hat, the act is more aggressive than you might assume.

Mariah Hillman, a pigeon advocate, said: “At first, I was like, oh my God, that’s cute! Then, I was like, wait a minute. How did they get those hats on there?”

Hillman runs Lofty Hopes and hopes to track down every Las Vegas pigeon with a miniature cowboy hat and remove them. They understand that the hats are “cute,” but they’re not really good for the health of the birds.

The motto of Lofty Hopes is “a pigeon positive movement.” The group understands that the general public is not fond of pigeons and hopes to changes the public’s perspective on that issue.

While this could be a prank – or a PR plan for the rodeo – people are talking about the cowboy hat-wearing pigeons of Las Vegas.

One person tweeted the Nevada SPCA with the following warning: “The cowboy hat pigeons are cute, but they might not be able to see well, making it so they can’t escape predators coming from above. And the hats are affixed possibly with glue? Poor pigeons. Glad there’s a rescue group looking for them.”

On Monday, Lofty Hopes shared a video update about their work with the cowboy hat pigeons. The groups want to find anyone who might know something about who put the hats on the birds if you see a pigeon with a cowboy hat, message Hillman and wait for her to come to trap them.