Police Decide To Burn 3 Tons Of Marijuana, Then Realize They Made A Huge Mistake 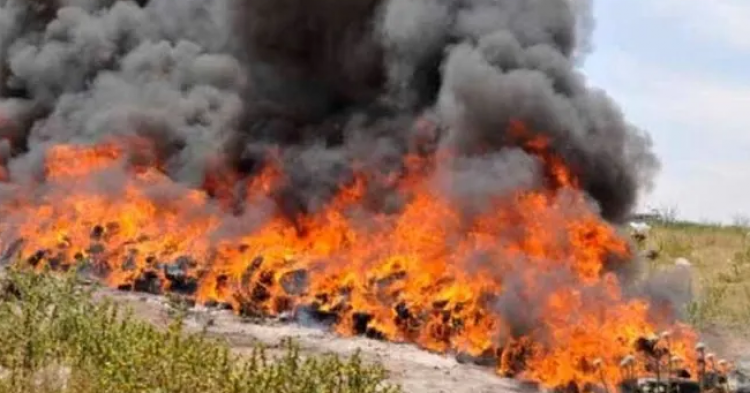 Police officers in Indonesia made a massive drug bust when they caught a criminal operation that was in possession of more than three tons of highly potent marijuana. Because cannabis is not legal in Indonesia (like it is in many states in America), police were eager to get rid of it before it made its way back into the wrong hands. However, police decided to burn the 3.3 tons of marijuana in a bonfire outside of their West Jakarta police station located in Palmerah – and the result was not what they expected.

Because the police burned so much marijuana, they infected the air in the surrounding town with THC that reportedly got many people “high.” Locals complained of dizziness, headaches, and euphoria, which can all occur when someone inhales too much marijuana smoke. In an effort to get rid of the drugs, the West Jakarta police ended up burning them up so people in the area could inhale them accidentally. It was a major mistake by the Indonesian police department that was trying to protect people from the harms of cannabis.

Locals were bombarded with marijuana smoke because of the local police. Victims who suffered from symptoms of being high included journalists who refused to stay silent about what the police had done and the mistake they had made by burning so many drugs in the open air near townspeople.

In addition to the marijuana, reports also indicate the police burned ecstasy pills and crystal meth that had been confiscated in the drug bust. It is possible that these substances also infected the people in the surrounding area and gave them highs.

The fire consumed 1.8 kilograms of crystal methamphetamine along with 2,538 ecstasy pills. Fortunately, the police did not put these chemicals into the local water supply but got rid of them in a better way. If the chemicals had made their way into the water, locals would have been drinking contaminated water that probably would have gotten them high on those drugs.

Locals complained that the burning marijuana was “too strong” and made the air taste much too “tangy.” The smoke in the air was so acrid and dense that people began suffering headaches and dizziness as a result.

While these police officers were trying to dispose of the seized marijuana, they made the huge mistake of burning it, which only served to get people in the nearby town high. The mistake would be one that the police in Palmerah, Indonesia, will struggle to ever live down because it was such a ghastly error – one that goes against everything the police stand for. Cops are supposed to get people to stop abusing drugs, but in this case, they were the ones who got the entire town high on marijuana smoke.

Fortunately, marijuana is not that dangerous. Highs from the drug last for an hour or two and do not have any life-threatening consequences. Symptoms like dizziness and headaches pass and the police should also pass next time they come across tons of green while on the job.