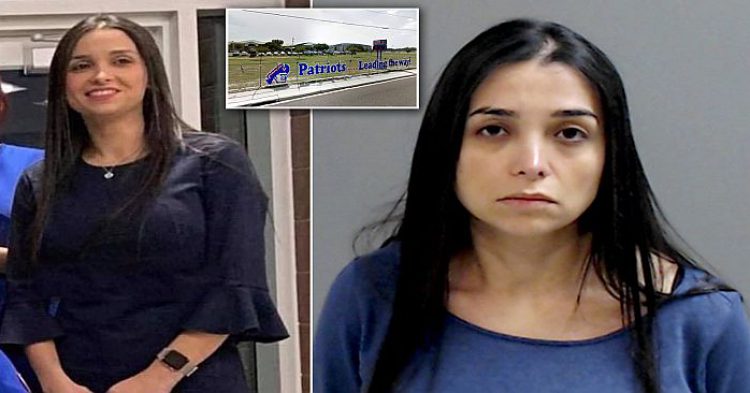 In Mission, Texas, a teacher was on a mission to do wrong by her students. She has since been placed on administrative leave after numerous allegations have come forward alleging how she engaged in a heated sexual relationship with an underage student at the school. The teacher, 39-year-old Edna Mabel Longoria who hails from McAllen, Texas, has since been charged with engaging in an improper relationship, which is a second-degree felony in the state of Texas punishable by twenty years in prison as well as a $10,000 fine.

Longoria now plans to fight the allegations and prove that she never engaged in the relationship with the underage boy. However, the former health science teacher at Mission Veterans’ Memorial High School might be in too deep. A spokesman for the Mission Consolidated Independent School District, Craig Verley, Longoria was fired once the accusations came forward.

The truth came out when the rumors at the school had gotten too common. One student, who knew the details of the alleged sexual relationship between the high school boy and his 39-year-old teacher, revealed the details of the tale to school administrators. As soon as the high school admin team learned that Longoria was supposedly sexually molesting one of the students, they took immediate action to get more information and put the teacher on leave.

But now that the police department has been called in for backup, the teacher was cuffed and locked away until the judge is ready to slam the gavel on her and make a decision.

The 17-year-old victim told police that he had been subjected to numerous sexual encounters with Longoria since last February. They’d had sexual relations inside a classroom on the school campus. This meant that investigators were able to maintain a search warrant and thus “located multiple biological fluids” flung about the school grounds, which belonged to Longoria and her victim.

The student also handed over his cellphone, which contained much damning text and Snapchat messages “that were inappropriate and contained material of a sexual nature.”

Because the allegations have given the Mission, Texas school a horrible reputation, Principal Fidel Garza Jr. has tried to put more his mark on the situation and shut down further rumors.

But he’s not doing a good job. Instead of being direct, he wrote a message to parents about “a report concerning the alleged behavior of one of our employees.”

Meanwhile, Longoria has the heavy-hitting attorney Terry Palacios in her corner. Terry refused to provide a comment from the client.

On Thursday, the teacher posted $50,000 bond and was released from jail.

Meanwhile, MCISD has encouraged parents to “take a moment to speak with their children to reinforce the importance of reporting any information that could impact student safety.” The school added that it “will continue to be open to any concerns brought forward regarding student well-being.”