Police Officers Ran Out In Riot Gear To Have A Snowball Fight With The Neighborhood Kids : AWM 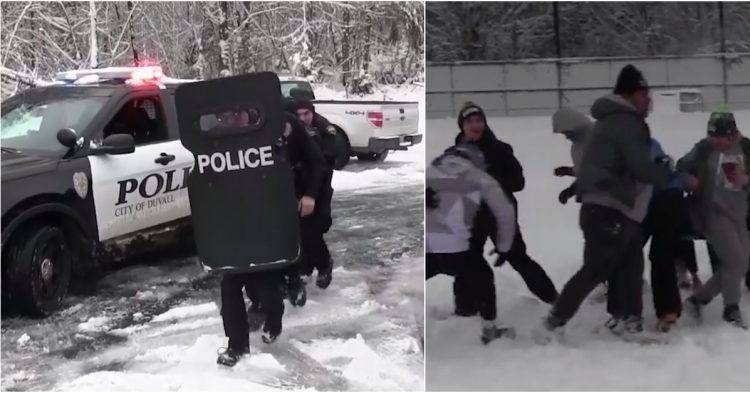 In the sleepy town of Duvall, Washington, police officers arrived at the scene of an “incident” in full riot gear prepared for the fight of the century. The group of officers had the advantage when it came to the opponents, a group of children just trying to have fun with the snow. Because the cops arrived at the scene of an ongoing snowball fight with their police cruisers’ lights flashing, the kids were alarmed – until they realized that the cops wanted in on the wintertime fun.

The police were prepared to have a blast with the local kids. Since the snow had fallen and was the perfect type to roll up snowballs, everyone in the community wanted to play. And since the crime was slow that day, the group of cops had a few minutes to spend playing in the snow with the local children of Duvall, Washington.

When the cops exit their heavily armed squad cars, they’re hiding behind riot shields. This unfair advantage gives them a leg up in the snowball fight. Because the officers are charging at this group of children in full riot gear, the kids are rightfully terrified. They’re worried that they’ve broken some sort of rule or other and don’t understand why the police officers are barreling toward them with the shields up until it becomes clear the cops are here to join in on the fun.

The video of the snowball fight was uploaded to the Police Department’s Facebook page. The cops said that they were called to the scene when a squad of “local hostiles” were armed with “improvised projectiles made out of fluffy snow.”

This meant that the cops had to be prepared in their riot gear to be able to defend themselves from the improvised projectiles.

The complete Facebook caption read: “Patrol Log 1230 hours – Big Rock Ballfields: During inclement weather conditions, Duvall Officers were dispatched to a group of suspicious characters in a local park. Officers arrived and contacted a group of local hostiles, who were armed with improvised projectiles made out of fluffy snow. Officers put up a valent effort, but were immediately out-gunned and numbers were just not on their side. Officers apologize to Officer Clark who was left behind as they tactically retreated. Just another day in Duvall…”

The video was a big hit among both the locals and from people from far away. Here are just a few of the comments that were shared on Facebook when the video went viral.

“Other departments should take note. This is how you change public perception of Law enforcement In today’s social media age. Whoever is in charge of putting this together isn’t getting paid enough. A+ work guys! Keep it up!”

“I think this video is absolutely amazing!!! Duvall Police Department I remember seeing it early this year- if you guys ever want to partner up and do a video like this or some other video with a cinematic approach Hollywood style -let me know- would love to show the light of the police force in the time where there is a lot of negativity.”

“What happened to no man left behind? You left your buddy to take the onslaught of snowball mayhem! You guys are the best! God bless you for your service and a flawless sense of humor!”