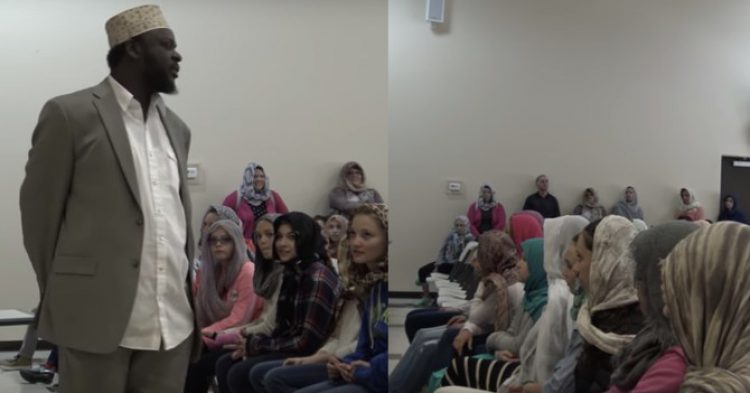 A school in Colorado was planning a field trip to a local mosque in Denver. However, the school administration has come under fire for asking its female students to abide by the mosque’s strict dress code. The field trip, which was organized for students in the world religion class, was a great way to introduce students, who may not otherwise have any contact with Muslims and the religion of Islam, a chance to get inside of a mosque and see that it’s really not that much different from a Christian church – except that the women were expected to dress a certain way.

Because the school asked the female students to cover their hair and abide by the mosque’s dress code, conservative radio talk show host Peter Boyles was outraged. He obtained a copy of the notice that the school had given parents of girls before the field trip, and read the notice aloud on KNUS-AM radio for his fans and critics alike to hear.

“We will be visiting the Denver Mosque, the Assumption Greek Orthodox Cathedral, and the Rodef-Shalom Synagogue. There is a dress code for this trip. All students must wear appropriate long pants. Ankles must be covered. Girls must bring wide scarves or hooded sweatshirts for the mosque.”

Although the locations of the cathedral and the synagogue were known, there was no listed address for the mosque identified as the “Denver Mosque.” There was also no listing for a mosque by that name on the Salatomatic, which is a website that tracks the locations of mosques. It lists seventeen mosques in the greater Denver area but none by that specific name, which has shocked Boyles and his conservative listeners.

Following the visit to the religious houses, the students would “eat lunch at Park Meadows Food Court.”

Boyles was outraged that the public school would make its female students dress differently than its male students. The school is supposed to treat boys and girls equally. But how could they do that if they are taking a select group of students, those who are attending the world religion class, and take a visit to a mosque? Wouldn’t they have to abide by the religious rules in order to attend?

“They’re holding these girls to a different standard,” Boyles said. Then he added, slickly, “for a religious reason.”

Boyles was outraged because he felt that the school district was forcing the students to follow Islamic principles, which should not be allowed to “public school kids.”

It is assumed that the students must abide by the dress code of every house of worship they attend on the world religion field trip. However, the Mosque required specific headdress rules, which upset Boyles and his listeners.

Because these students are leaving the school ground and going into the house of worship that may be unfamiliar to them, the Denver school felt it was appropriate to ask its students to respect the religious traditions of the specific place and cover-up as requested.

Do you think these students should have to abide by the Muslim dress code while visiting the mosque?