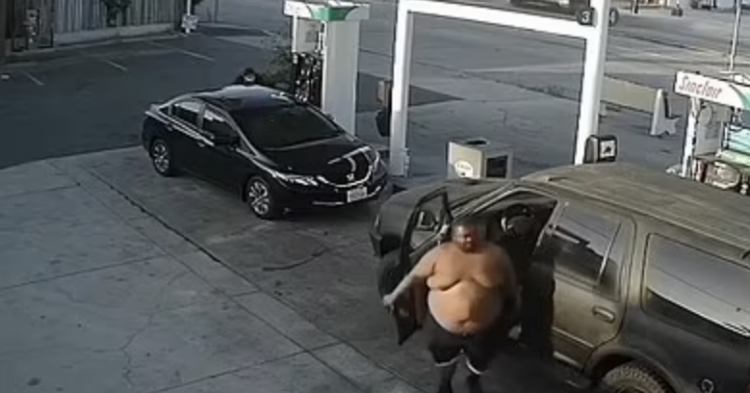 Police are on the hunt for a large man who was filmed ruthlessly beating a woman at a Los Angeles gas station. The victim, who was pumping gas into her vehicle, was randomly attacked by the man who appeared on the station’s surveillance camera without a shirt on. Police are estimating that the man weighs three hundred pounds and are still working to track him down to hold him responsible for the brutal attack that occurred on May 30 in Gardena, California.

The Los Angeles County Sheriff’s Department released a press statement asking the public to help them identify the man in the footage. “On Sunday, May 30, 2021, deputies from the Los Angeles County Sheriff’s Department Century Station responded to an assault call at the 500 block of Rosecrans Avenue in the city of Gardena at approximately 7:09 pm.”

The press release continued, “The victim, a female Hispanic adult, stopped at a gasoline station. As she began to pump gasoline, the suspect drove into the parking lot and parked directly in front of the victim’s vehicle. The suspect calmly exited his vehicle, walked towards the victim, and without warning or provocation, punched the victim, causing her to fall to the ground.”

When the obese man had the woman on the ground, he continued his ruthless attack. The sheriff’s office indicated that he kept punching the female victim in her head and face.

“During the attack, the suspect grabbed the victim’s hair and slammed her head against the vehicle and onto the ground several times,” the LA County Sheriff’s Office press release stated. “After the assault, the suspect calmly walking back to his vehicle, where he enters his vehicle and drives away. The victim did not recognize the suspect and firmly believes she does not know the suspect personally.”

The attack seemed to be random because the man did not steal any possessions from his victim. Police do not believe the woman provoked the man in any way. They think it was just another example of ruthless criminal activity run amok in one of the largest cities in the United States.

The press statement added, “The victim sustained severe injuries to her head and face due to the attack and was subsequently transported to a local hospital to be treated for her injuries. The victim has since been released from the hospital and is recovering at home.”

Now, the sheriff’s office is looking for the public to help them identify the suspect, who “is a Black male adult, 30-35 years old, short dark hair, approximately 6’0”-6’5”, 300-350 pounds. He was last seen wearing dark shorts, dark shoes, and no shirt. The suspect’s vehicle is a Ford Expedition, an older model, matte black paint, and black rims.”

The statement concluded with a plea to the general public.

“Century Station detectives are asking for the public’s assistance in identifying the suspect involved in this crime. Anyone who witnessed the incident or any suspicious activity… is asked to contact Century Station Detective K. Mclnnis.”

What do you think about this random violent crime?