Snake Too Busy Devouring Rat To Notice Who Else Had Entered The Arena : AWM 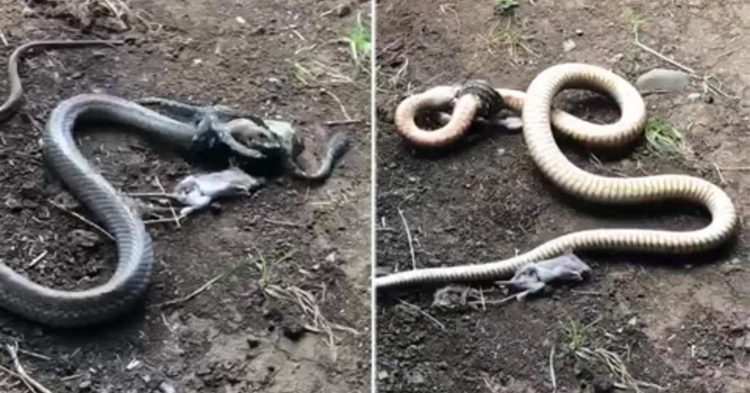 After doing all the hard work to catch a rat, a python got down to business eating it. The snake was opening its mouth wide and started stuffing the rat down into it. However, as the python started to enjoy the rat meal, another snake, a larger brown snake, came up and pounced on the python, trying to steal the meal out from under it.

After the brown snake attacked, the python and the larger snake had no choice but to fight to the death. Because they were caught in the battle, the pair needed to defeat each other before the winner would be able to eat the tasty victory meal of the rat. 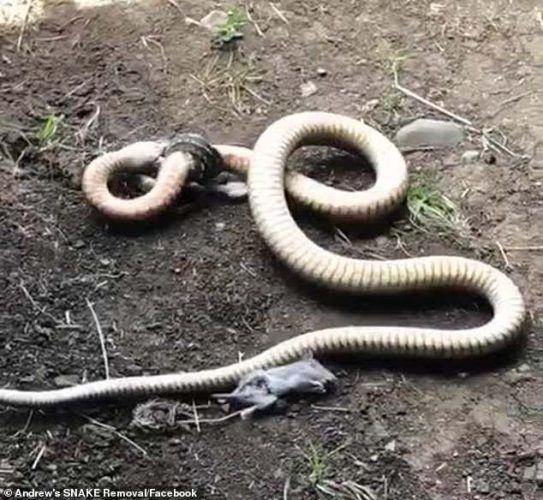 The incident occurred in Mulgowile, which is in the Lockyer Valley Region of Queensland, Australia. Snake catcher Andrew Smedley, from Ipswitch, happened to be there to record the snake battle in all its glory and share it online for all his followers to enjoy.

Smedley uploaded it to Facebook calling the video a “crazy turn of events,” because he started by recording the python eating the rat and never expected the surprise of the brown snake to come out of the bushes.

“Jessica (who took the videos) walked into the shed and knew that there must have been a snake as the willy wagtails were making a lot of noise,” Smedley wrote on Facebook.

He came to the shed and watched as a brown snake climbed about 15 feet into the air on a beam to get to the rats that were having a field day since they knew the snakes were coming.

“There were rats scattering everywhere and jumping for their lives off the beams and a lot of squeaking sound.”

When the brown snake came back, it was carrying something in its mouth – something that no one expected to see, especially not snake catcher Smedley. 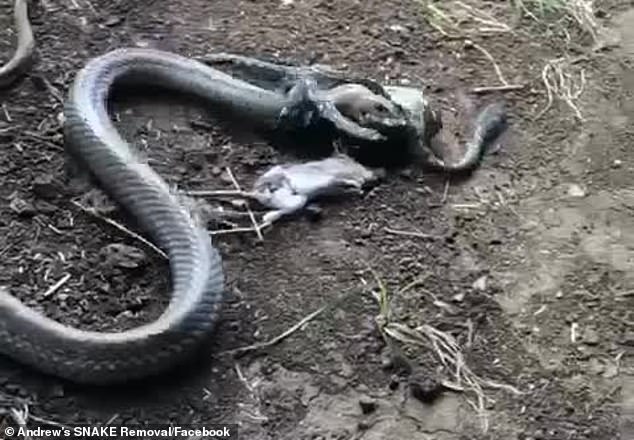 “There was a small python in its mouth, and the python was coiled around a rat and not letting go,” the snake catcher wrote.

The reptiles fell to the ground, and at this moment the python released its hold on the rat. That indicated that it was time for the python and the brown snake to get down to business – and fight.

The python, which was much smaller than the brown snake, used its body to coil around the snake’s head and held on for at least a half hour.

However, the brown snake lashed out and bit the python. At this point, it was just a matter of time before the venom beat it.

“Unfortunately for the python, once it had been envenomated it was all over. Little python still put up a fight but it didn’t last much longer and was ultimately eaten,” Smedley added with some regret.

The video shows the snakes battling for victory, but the small snake was outmatched and lost. The brown snake then took the python under a bucket to turn it into a meal.

“To sum up, the rat the little python was eating is now dead, and the python who was enjoying the rat for lunch is now in the stomach of the brown snake,” Smedley wrote. He finished the post with: “Nature at its best.”