Stray Dog Steals Pizza From Workers On Their Lunch Break, Leads Them To Starving Family 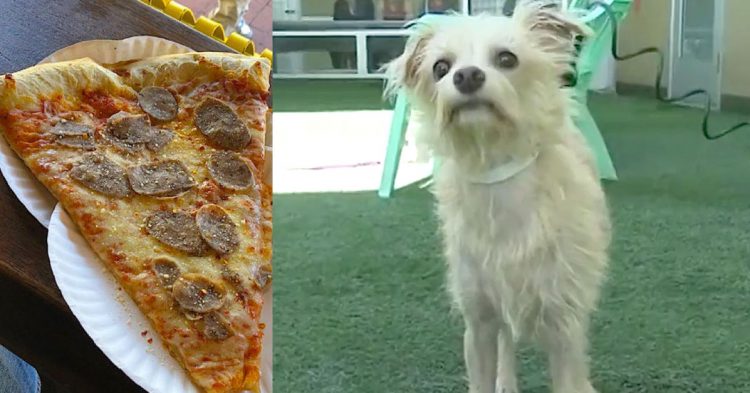 During a lunch break in Palo Alto, California, on a warm day in mid-April 2018, workers were enjoying a delectable pepperoni pizza. The group had all pitched in to order the pizza and were sitting around a table, chatting about their work woes. Suddenly, a straggly stray dog ran up and snagged a slice of pizza from the table. Because the group of workers did not react in anger, they could see that the dog had grabbed the pizza slices out of necessity – and that she was in desperate need of care.

The dog was clearly abandoned and malnourished. If the stray dog had the courage to steal a slice of pizza from the table of paying customers, she was truly at her wit’s end, which was why the workers in the group did the right thing and phoned the Peninsula Humane Society and the SPCA. They told them about the dog that had stolen their slice of pizza and provided a thorough description.

Within the hour, staff members from the organizations were on-site looking for the pooch. It didn’t take long for them to find the hungry dog.

“We received a call from a concerned person in East Palo Alto who reported a stray dog stealing a piece of pepperoni pizza he and his friends were enjoying on their lunch break,” said PHS/SPCA’s Communications Manager Buffy Martin Tarbox.

She was still lingering around the pizza shop, hoping to get another chance to steal some food to survive.

That’s also when the rescuer workers found out that she had not only stolen the pizza for herself. She had a litter of six puppies that were just days old. The mother needed to have enough nourishment in her body so she could provide milk to the starving little puppies.

Tarbox said, “When our rescue staff arrived on the scene, the hungry little dog led us to her small nest of six tiny one-week-old puppies.”

Thankfully, the rescuer workers were able to save the dog, who has since been dubbed Queen Elizabeth, and her six little puppies. The puppies needed a lot of attention because they were near death out of starvation.

“This poor little dog was struggling to survive on her own, eating whatever scraps of food she could find and trying to take care of her babies,” the Peninsula Humane Society reported.

Tarbox added, “Her puppies have been weaned and are now all available for adoption at our shelter in Burlingame.”

While the mother of the puppies was named Queen Elizabeth, her litter also received some stately names. The pups were all named after members of the British Royal Family – at the time. She was rescued, at least.

The little ones are called William, Harry, Duchess Kate, Lady Di, Charlotte, and Meghan. With names like those, these dogs are bound to find forever homes that will love them for the rest of their days.

However, their mother, Queen Elizabeth, did the best she could while on her own. Thankfully, the workers on their lunch break called animal rescue to find her help.