Struggling Family Has Been Living In The Woods. Mom Cries When The Cops Show Up 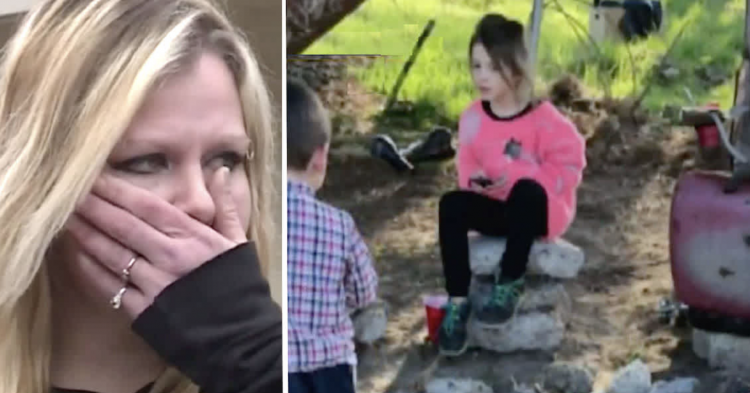 Hard times can come out of nowhere. An American can be going along, everything as right as rain, and then one stroke of bad luck can change everything. Shannon Loveless and her family came upon some bad luck and found themselves out of a home and living in the woods out of their van. The family, who were from Sacramento, California, had nothing left and had to struggle to survive day after day.

Because the Loveless family did not have a home of their own after falling upon hard times, Shannon and her children would sometimes camp out behind a local Walmart location. They’d hide in the woods behind the store and make a camp for the night. The family would beg for food and look for leftovers wherever they could and would take turns sleeping on the hard ground and inside the family van.

“There was no light at the end of the tunnel,” Shannon told CBS Sacramento. Her life was an endless story of pain and suffering.

But everything changed for Shannon Loveless and her family when two deputies, Officers Tim Yee and Johnny Le, came upon the family while they were camped out behind the Walmart. Shannon feared that her life was going to get harder because she knew that cops were not often very forgiving of homeless people – especially in California, where the homelessness crisis has gotten out of control.

In the past, Loveless had never met a police officer who had treated her family with kindness. They were all gruff and short with her and urged her to do better than to sleep in a van behind a Sacramento-area Walmart with her three children.

However, Shannon was disrupted from making lunch for her three children when Deputies Tim Yee and Johnny Le arrived. They found the family struggling to survive – but instead of punishing Loveless for living out of her van behind a Walmart, they opened their hearts to the family and did something unexpected.

The deputies were horrified to see Loveless and her children living the way they were. The children were starving and dirty and had clearly been denied basic necessities that other children take for granted.

Instead of punishing Loveless for being homeless, Deputies Yee and Le returned with a garbage bag full of donated items. They brought food, toys, and clothing back to the Loveless family so they could have more than what they had before. But that was not all the police officers did as a way to serve their community.

By the time the officers met up with Loveless, she and her children had been living out of their van behind the Walmart for four months. Life was very hard for the Sacramento family, and they needed a helping hand. Fortunately, the police officers were ready to offer their help.

The officers helped the family get into a motel until they were able to transition to more permanent housing. It was a huge step forward for the Loveless family – and a display of generosity from police officers that really made a difference.