Student Gets Suspended For Carrying His Friend To The Nurse During An Asthma Attack : AWM

When a concerned student realized that his classmate was having an asthma attack, he took swift action. The student, Anthony Ruleas, picked up the boy with the attack and carried him to the school’s nurse’s office. While most people thought that Anthony was heroic for bringing the boy to the office to get the care he needed to breathe, the school “honored” Anthony by suspending him for taking the classmate to the office against the wishes of the teacher.

Anthony, 15, was stunned that the school punished him for saving the life of a classmate. But his mother, Mandy Cortes, has decided to make the issue public. She’s been speaking to the media about her heroic son’s deed and questioning why the school has decided to suspend him for helping save the life of a classmate who was suffering from an asthma attack. 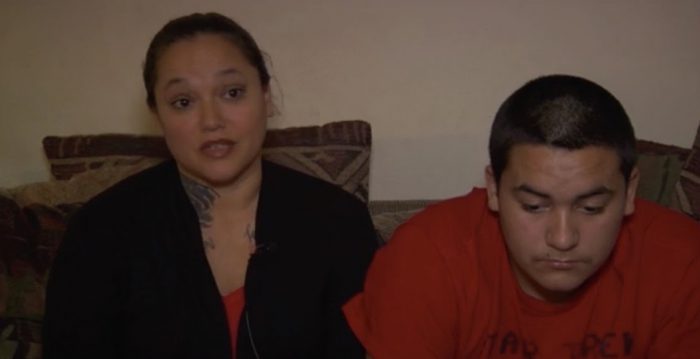 Mandy has since vowed not to let Anthony return to the ungrateful school that suspended him. Instead of allowing him back into class at the Gateway Middle School, Mandy would rather home-school her boy because the school showed no respect for him despite him trying to save the classmate having the asthma attack.

Anthony, along with the teacher and other students in the class, was forced to watch the student wheezing and gagging from the asthma attack. It was clear that the student was struggling to breathe, as she had told the class that it was an asthma attack. The teacher, upon learning this, forbade anyone to do anything. Instead of picking up the phone, the teacher decided to write an email to the school nurse. The teacher clicked send and then told the students to remain calm and stay in their seats.

Anthony, however, could not bear to watch the student suffer. The asthma attack was getting worse, and the student fell from her chair for lack of oxygen.

“We ain’t got time to wait for no email from the nurse,” Anthony said. Then he decided to disobey the teacher’s explicit orders. He rose from his seat and grabbed the wheezing student, and carried her to the nurse’s office.

Following his heroic efforts, the girl texted Anthony and told him that because of him, she was doing better. Although he had helped save the day, the officials at the Killeen Independent School District decided to suspend Anthony for disobeying the teacher’s orders. The teacher obeyed, writing Anthony up, and he was suspended from school for two days.

The teacher did not care that Anthony was a hero. His heroic move had stolen the teacher’s thunder and made the teacher look bad for not taking swift action during the emergency. Here’s what the teacher’s report said:

“During fifth period, another student complained that she couldn’t breathe and was having an asthma attack. As I waited for a response from the nurse, the student fell out of her chair to the floor. Anthony proceeded to go over and pick her up, saying, ‘F*** that. We ain’t got time to wait for no email from the nurse.’ He walks out of the class and carries the other student to the nurse.”

Do you think he should have been suspended?