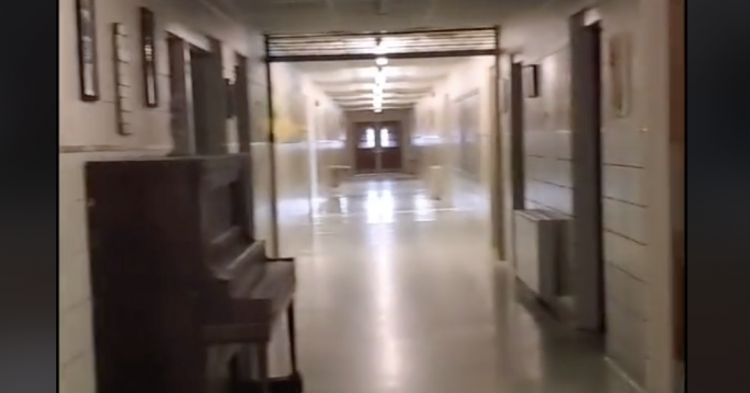 A teen turned to fans on TikTok to reveal the shocking conditions his family has resorted to living in. Now, the video uploaded to the Chinese platform by Riley Hansen, 15, has gone viral thousands of times over as people gawk in wonder as to how his family has managed to live inside of an abandoned elementary school for years after purchasing the property at a rock-bottom price.

Hansen first turned to TikTok as a way for him to upload videos. In his first videos, Hansen was showing his TikTok followers what it was like for him to learn how to drive. However, Hansen gained international attention for his video posted to TikTok on February 2, 2021, because he revealed that his family was living inside of an empty elementary school that they purchased when it was on the market.

Although viewers were shocked by the boy’s accommodation, Hansen said he really enjoyed living on the property with his family. He captioned the shocking video with, “Yes, it is an odd place to live, I know, but it’s pretty cool.”

Thousands of viewers thought that Hansen was tricking them. However, he came forward to clarify that his family purchased the empty elementary school and used it as a home just like other families used houses and mobile homes for their shelter.

“We do own the school, and we bought it like buying any other building,” Hansen told In The Know of his family. “Some of my family does live with me. We have lived in it for the past four years.”

According to a comment from Hansen on TikTok, his family has been able to live in the school affordably. However, repairs to the old school building can be expensive, but they do them themselves to save on shelling out cash to professionals.

In the video, he admits that his family seems to be constantly working on the old school building to make it more comfortable to live in.

“The school is an ongoing project. It seems like we are always remodeling it,” he wrote to caption the video below, which has amassed more than 6 million views and has received over one million likes.

The most popular comment on TikTok was a criticism of Hansen’s family.

“It’s not really a remodel. It doesn’t look good at all. Like y’all are squatting.”

Another person wrote, “Lucky, you got your indoor basketball court.”

“This looks awesome but feels cursed at the same time.”

“How is there not enough rooms for everyone to have their own room? In a literal school,” one viewer wrote.

“Imagine having to walk one of the hallways to use the bathroom in the middle of the night.”

Other people found it bizarre that Hansen has to go to school during the day and return to his family’s elementary school home at night.

Hansen confessed that a lot of children are living in elementary school. “There are only like eight rooms currently,” Hansen said. “And we have seven other kids in the house, not including me and my sister.”

What do you think about this family living in an old elementary school?

Reply to @seanedwards301  The school is an on going project, it seems like we are allways remodeling it.