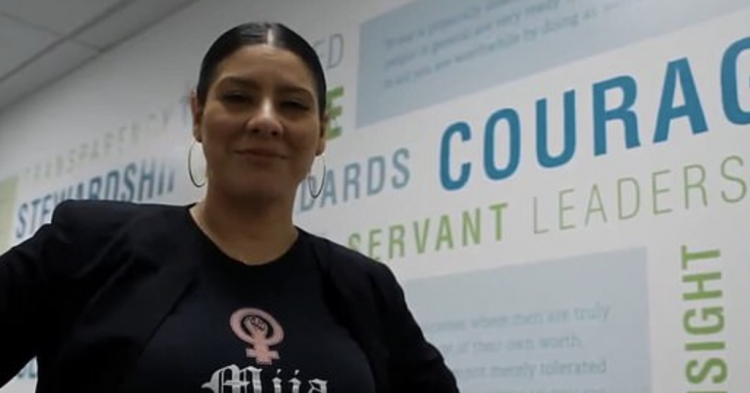 The CIA (Central Intelligence Agency) has published a recruitment video that has become a laughing stock among Republicans and conservatives. The new video, which features an unnamed 36-year-old CIA officer, features “woke” language that was meant to appeal to younger recruits. The female officer in the video describes herself as an “intersectional cisgender millennial” and promises viewers that she is “unapologetically me” after struggling with being a woman at a male-dominated organization.

Although the CIA officer admits that she had to deal with “imposter syndrome” when she first joined the CIA, she refuses to “internalize misguided patriarchal ideas of what a woman can or should be.” Her dedication to her personal growth and career advancement has helped her achieve success in the CIA. 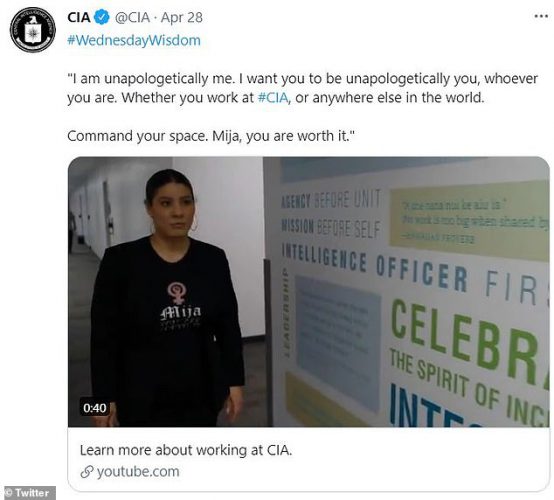 The intelligence organization posted the video to Twitter on April 28 along with the caption: “I am unapologetically me. I want you to be unapologetically you, whoever you are. Whether you work at #CIA or anywhere else in the world, command your space. Mija, you are worth it.”

In the video, the unnamed agent, who is thirty-six years old, tells viewers: “I am intersectional, but my existence is not a box-checking exercise. I am a walking declaration, a woman whose inflection does not rise at the end of her sentences, suggesting that a question has been asked.”

She adds: “I am a woman of color. I am a mom. I am a cisgender Millennial who has been diagnosed with generalized anxiety disorder.”

Unfortunately for the CIA, their recruitment video has been heavily ridiculed by conservative social media users who labeled it “woke.” Another person said, “The world is laughing at us.”

Donald Trump Jr. tweeted: “China and Russia will love this.” 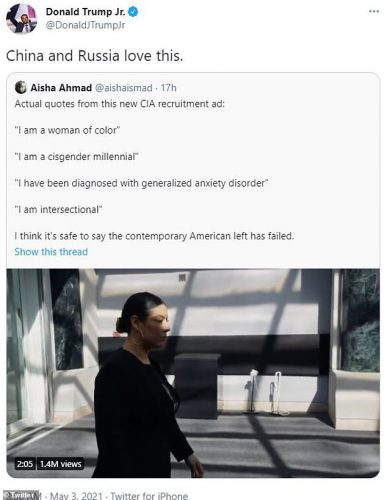 Another critic, former CIA officer Bryan Dean Wright, tweeted: “The CIA used to be about mission to country. (I speak from experience). Now it’s now about demanding — and getting — accommodation to fix an emotional wound or advance a personal agenda. America is less safe with this new CIA and dangerously more political.”

Glenn Greenwald was part of the team that won a Pulitzer Prize for the reports that used the leaked information from Edward Snowden. Greenwald tweeted, “Lots of people who pay no attention to the CIA and the security state seem to think this CIA video is the first time they’ve promoted, endorsed and embraced woke ideology. They’ve been doing it for years. I wrote about back in 2015.”

One Twitter user commented: “I hope the CIA actually is hiring fail brain millennials with debilitating anxiety like in the ad. that would be hilarious. Sam Fisher getting captured and tortured because the analyst working on his mission is hyperventilating due to being quote tweeted.”

Matt Taibbi added: “The really telling thing about this video os that it speaks to the CIA’s assessment of who would be interested in working for them. Clearly, they think they have appeal to woke millennials – and they’re probably right.”