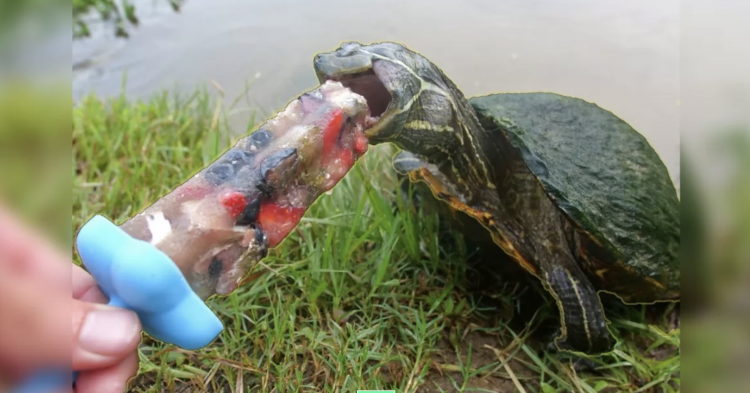 A YouTuber has unveiled the unique recipe he created to create popsicles for his turtles. As you’ll see when you watch the video included at the bottom of this article, this man has combined all types of fruits to make a popsicle bar that absolutely delights the turtles he has living in his pond. In addition to his videos with his turtles, Kyle Naegeli, who calls himself The Fish Whisperer, loves to share videos of himself fishing and going on various outdoor adventures – but it is his turtle feeding video that has sparked so much attention on social media and YouTube.

At the start of the viral video, which has amassed 49 million views and counting, the YouTuber shows how he creates these turtle popsicles. First, he cuts up his ingredients. In the video, he shows himself cutting up fresh strawberries as well as small fish, which delight the turtles when mixed together. He also cuts up some blueberries.

Next, he puts all of the ingredients into a popsicle mold. He simply plops them inside and then adds some pond water to the mix. He puts the top onto the popsicle mold and then places the pop in the freezer so it can get ready for the turtles to enjoy.

“I got the turtles a special little treat today,” he said for his July 4, 2019 video. He is giving the reptiles a red, white, and blue popsicle with strawberries, blueberries, and whitefish. The mixture is just what the turtles have been craving, which is why the YouTuber knew to create the popsicle in the first place.

Tens of thousands of people shared comments about the video. The following are some thoughts from people across the globe.

“Turtle: A strawberries with blueberries and fish that are frozen on a stick offered by a giant? YES!”

“Imagine having a giant alien visit your world every so often just to bring you and your friends’ exotic food.”

“People who make full home-cooked meals for their dogs: finally, a worthy opponent. Our battle will be legendary.”

“I love how the turtle takes a tiny bite, realizes it’s great, then starts taking chunks out of it.”

“At first, I thought these were popsicles that humans eat, but then I looked closer to see that it was a very turtle-friendly popsicle.”

“I love this guy. He’s so genuine! Making popsicles for them and spitting out random turtle facts at 2:31 mark, lol.”

“It is so satisfying how the turtles bite the popsicle and the sound, though.”

One person found the 2:55 mark in the video to be especially entertaining.

“Love how that one turtle’s just like ‘Move along buddy, you’ve got enough bites outta that. Save some for the rest of us.’”

One person warned others not to mess with the YouTuber because he has allies to back him up.

“Don’t mess with this guy. If you mess with him, he’ll summon an army of fish from the lake in his backyard.”

What do you think about these turtle popsicles? What’s your reaction to watching the animals enjoy the treats?