They Found Her Pregnant And Paralyzed, But Wait Until You See What She Looks Like Now 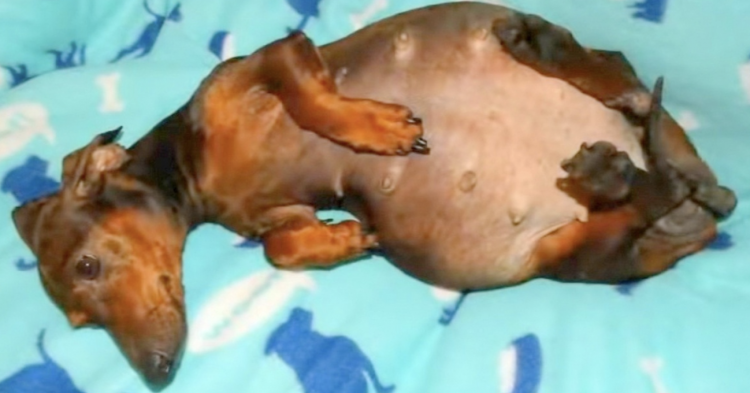 The dog in this photo is Maria. Her former owners abused and mistreated her. Not only did they neglect her to the point that she got paralyzed from the waist down, but they also subjected her to considerable turmoil by breeding her while she was paralyzed. Since she was a Dachshund breed, she was always prone to back problems as well as trouble walking due to her long spine.

Many dogs like Maria experience problems with their backs and hind legs. Since dogs of this breed are bred for their look and not for their functionality, they often experience health problems. Although Maria’s paralysis was not entirely out of the ordinary for a Dachshund, it was unthinkable that her former owners put her through the wringer, relentlessly using her as a puppy-carrier, to earn a pretty penny from her pain and suffering.

However, the fact that Maria was paralyzed came with an unexpected challenge for the breeder. Since she was no longer able to use her body from the waist down, Maria was going to require a C-section to deliver her puppies. With a $3,000 price tag for such a procedure, her owners realized that it was a better business decision for them to abandon the pregnant and paralyzed dog instead of doing the right thing and helped her.

Fortunately, an animal rescue group stepped in and offered Maria a second chance. Besides helping her with the pregnancy, they also gave the dog the emotional support she lacked while in the “care” of her cruel former owners. They just wanted to use her like a puppy-making machine and take as much money from her efforts as they could. Once they realized that she’d cost them more money than she could make them, they abandoned her to her fate.

If it was not for the good people at Friends of Emma Medical Rescue, Maria would have probably died. She was covered in fleas and forcibly fed during her paralysis. Although she was in poor shape, Maria kept fighting for her life so she could see her unborn puppies into the world.

The video included below shows you the journey that Maria went through. She not only survived childbirth, but she was also given the proper medical procedure she needed in her condition. And not only that but all of her puppies have since been adopted into loving homes.

Maria is doing better than ever before.

Hundreds of people shared comments about Maria and her story. Here are a few of them:

“I’m so happy for cute Maria. She and her pups are adorable. Shame on the people who abandoned her.”

“I remember having to give my dachshund physical therapy because his back legs went out, but a warm bath and massage every day help him to walk again. He lived to be 17.”

“This video makes me cry. How could somebody abandon her? Such a sweet dog! But I’m happy that she is loved and her babies are fine. Thank you, people, with good hearts.”

What do you think about Maria’s story?