They’ve Been Married 7 Years, But Watch His Face When He Hears Her Sing For The First Time 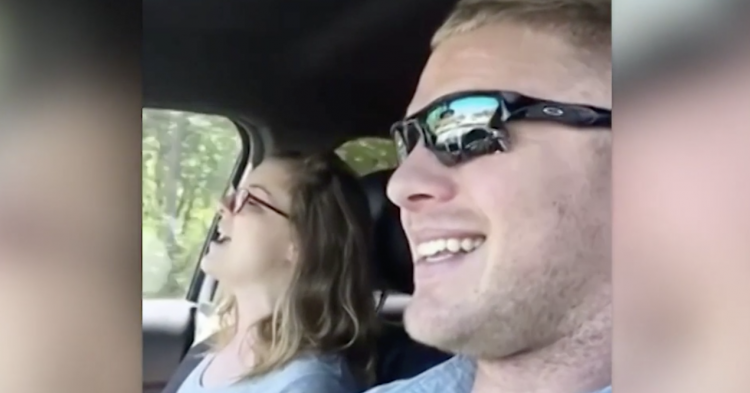 Marriage is tough. There are so many facets to building a good relationship that we could write an entire book about it – many people have done it already. But today, we’re just going to share a story about how one man never heard his wife’s singing voice. Although the pair had tied the knot for more than seven years, he had still never heard his wife open her mouth and sing a tune, which is why the video of her singing to him for the first time is going viral across various social media channels.

After seven years, most couples know each other pretty well. This was not the case for this couple. Husband Chase Knight may know a lot about his wife, but he never knew one important detail – she could sing. Not only could Chase’s wife sing, but she was good at using her voice.

Chase’s wife decided to show off her innate talent one day while the pair were driving along through their home in Kansas City, Missouri. Fortunately, Chase had a camera running as his wife burst out into song and shocked him with her voice after seven years of marriage.

The song that inspired Chase’s wife to sing was “I Don’t Care About You” by Lake Street Drive. According to the YouTube video description from Caters Clips, “A husband finally heard his wife sing after seven years of marriage, though their children were less than impressed. After seven years of marriage, the traditional gift to receive is copper and wool, but for CrossFit trainer Chase Knight, 30, he received something much more special. Filmed during a car ride through Kansas City, Missouri, on May 4, his wife Jocelyn, 33, passionately sang along to Lake Street Drive’s ‘I Don’t Care About You.’ After over half a decade of waiting, Chase finally heard his wife’s lovely singing voice, which he couldn’t help but be blown away by.”

Throughout the video, Chase keeps stealing glances at the camera because he knows he’s capturing something worthy of internet fame. Not only will his clip go on to receive more than two million views after Caters Clips uploaded it to YouTube, but he has never heard his wife sing. Chase clearly wants to soak up the opportunity but also doesn’t want it to slip through his fingers hence the reason he cannot help but record it on camera.

Because his wife surprised him with her singing ability, Chase was getting choked up in the video. There’s just something so inspiring about learning something new about a spouse or significant other after so many years of being tied together through marriage. Although Chase thought he knew all there was to know about his wife, he was wrong and shocked when she burst out into song during their drive through Kansas City.

Are you surprised that this husband didn’t know his wife could sing? Have you ever kept a secret from your spouse like this? How long did it take you to tell them about your hidden talent?