This 7-Year-Old’s Letter To Santa Had Me In Tears By The Time I Got To The End : AWM 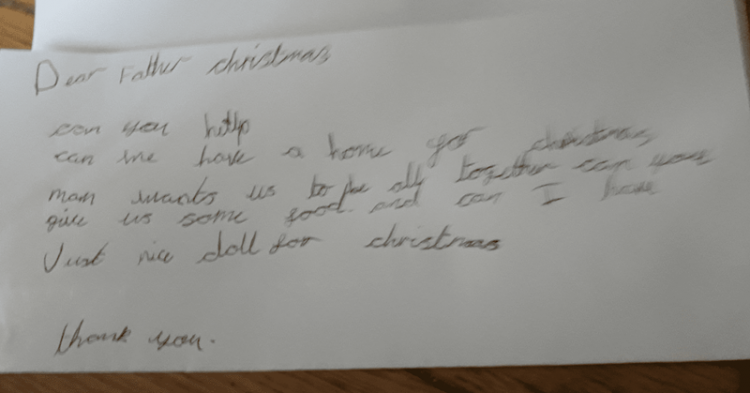 Children deserve to get everything they want for Christmas. But when one letter to Santa Claus that was addressed to “Father Christmas” was found, it revealed a story too sad to bear for the holiday season. A seven-year-old girl wrote a letter asking for “a home” and “some food” for the special holiday, and the letter just broke everyone’s heart because no child should go without a gift for Christmas, much less a home and food that are basic requirements of survival.

The heartbreaking letter was dropped into the Santa post box that was put at the Liverpool 6 Community Center in England. While most children ask for toys and other such gifts for Christmas, one little girl reminded everyone that not all children are so lucky at this cold time of year. While some children eagerly await the toys that are wrapped and under the tree, one seven-year-old child simply wanted a home and some food to warm their belly.

Because this child’s wish from Santa was for basic necessities instead of luxurious toys, the letter became a source of sadness on social media, prompting people to ask the government to put more energy into helping those in poverty this time of year.

The letter that the child wrote was simple. It said:

“Dear Father Christmas, can you help. Can we have a home for Christmas? Mam wants us to be all together. Can you give us some food and can I have just (a) a nice doll for Christmas? Thank you.”

Because this little child just wanted three things for Christmas, a home, food, and a doll, people wanted to help make that wish come true. But who was this little girl? Would they be able to transform into Santa Claus and make it happen for her?

While the child has yet to be found, the community in Liverpool is doing what they can to find her. They want to help and make her Christmas wishes come true because she clearly does not have the abundance that many children have this time of year.

A local councilor, Gerard Woodhouse, said to Liverpool Echo, “No wonder young people have mental health problems. It’s just so sad. Unfortunately, it is what we see at the L6 Center. This is just one of many that we’re going to see from now until Christmas.”

Because homelessness and poverty are common scourges in the United Kingdom, and likewise in the United States, more children are going without during Christmastime when they should be getting showered with gifts and having their wishes come true.

Woodhouse is working with local authorities to help the children of Liverpool. While it’s his job to help the people who elected him, he wants to go above and beyond and do what he can for children like this seven-year-old girl who wants a home and food for Christmas.

“Referrals are coming in already in November, and it is just so sad. Last year was bad, but it is going to be worse this year. We’re seeing it now, and we don’t officially open for referrals. We have over one hundred so far.”