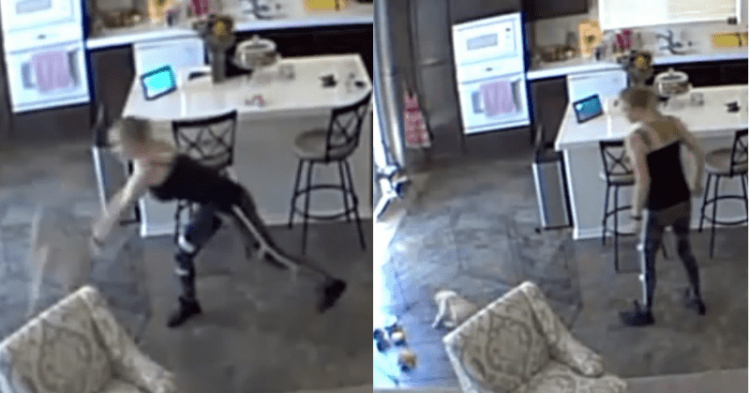 When a pet owner hires a person to look after their animal, they expect the person to be good with pets. But when one dog owner saw the surveillance footage from their Victorville, California property, they learned without a doubt that this dog sitter was the worst of the worst. In the security footage, you can see the female dog sitter getting violent with the 10-week-old golden doodle – and if you don’t like to view violent content, beware of the video included below.

In the clip, watch as the dog sitter unleashes her rage on the 10-week-old golden doodle named Lucy. Miraculously, the dog was not seriously hurt, which gave her owners relief. They didn’t want to have to take the little dog to the vet for injuries obtained from the dog sitter. Who would?

Since the abuse was made public, the website that offered the female sitter’s services has canceled her profile. The police are also investigating the incident and may bring criminal charges against the animal abuser.

Lucy’s owners are Bryce and Amanda Horton. They live in Victorville and are in love with their puppy, Lucy. So when they watched the highly-paid dog sitter getting violent with their pooch, they were horrified. In the video, the dog sitter slams Lucy to the ground.

The dog sitter, who has not been named, picks up the dog and then drops it to the floor. There was enough force in the attack that Lucy struggled to regain her footing directly following the abusive incident. Without a doubt, this dog sitter has little sympathy for animals and has a cold, cold heart.

The security cameras didn’t just catch video footage. They also captured the moment when Lucy is heard whimpering. As the dog struggles to regain her footing, the dog sitter does nothing. She simply stares down at the dog as if she is high and might and better than the “lowly” canine being at her feet.

KTLA shared the video on their website as well as social media. On Twitter, they wrote the following caption to entice viewers to watch the dog sitter getting abusive with the pooch.

“Victorville dog owners were shocked when they saw a woman they had hired through pet care service Rover abusing their beloved 10-week-old puppy.”

Rover does not want their dog sitters and other pet care service workers getting abusive with animals. The service is supposed to help pet owners feel relief, not strife.

“I saw it on the camera live, she was still standing there,” Bryce told the New York Post. “That’s when I talked to her through the camera, told her, ‘Hey, I saw what you did to the dog. You need to get your stuff and get out of this house.'”

When the Rover dog sitter was caught on camera, she had no choice but to flee as quickly as possible and hope that she gets away with it.

“I don’t understand,” Bryce said. “She had only been there for maybe fifteen minutes.”

What is your reaction to this abusive Rover dog sitter?