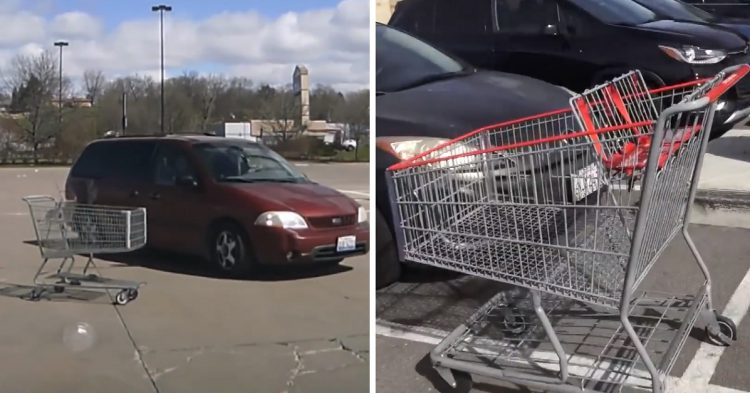 Sometimes a little effort or a little patience goes a long way to promoting greater good in the community or the world around us. Do you know those people who rush to the front of a line in traffic only to try to squeeze in at the last minute? Those people create more traffic, which slows down the roads for everyone else. When more and more people act out of selfishness rather than trying to do something – like waiting in line with everyone else – they create a ripple effect that ruins things for everyone else behind them while only saving themselves a few seconds of waiting.

At the moment, there may be many reasons why someone would leave their cart in a parking spot rather than pushing it to the designated corral. Perhaps, they’re dealing with a screaming baby and just need to get out of there as fast as possible. Perhaps, they oblivious and don’t realize there’s a designated spot for the shopping cart. Or, perhaps most commonly, they’re lazy and just don’t want to walk the few dozen feet to the designated area to deposit the cart when they’re done.

Inside Edition decided to get to the bottom of this issue. They sent their crew to hang out in a parking lot and lurk around until they found someone who abandoned their cart.

Most people felt that they were just being lazy and didn’t want to go all the way over to the shopping cart corral. Others, however, invented a story about how their abandonment of the cart was an altruistic move. They argued that by leaving the cart loose in the parking lot, they were helping other people find a cart more easily. They felt that by leaving the cart in the middle of the lot, it would be closer to the next person who came along and needed to pick one up. While that might be true, it is a strange way to approach the situation.

Either way, putting the shopping cart back into its designated spot only takes a few extra seconds. But it can save someone a lot of trouble because rouge carts and roll around and cause damage to parked or moving vehicles. Imagine how much that would upset you if that happened to your car.

Watch the Inside Edition report below. Have you been guilty of leaving a shopping cart in the middle of the parking lot? Will this make you rethink your habit?