US Women’s Soccer Team Makes Headlines With Their “Controversial” Uniform 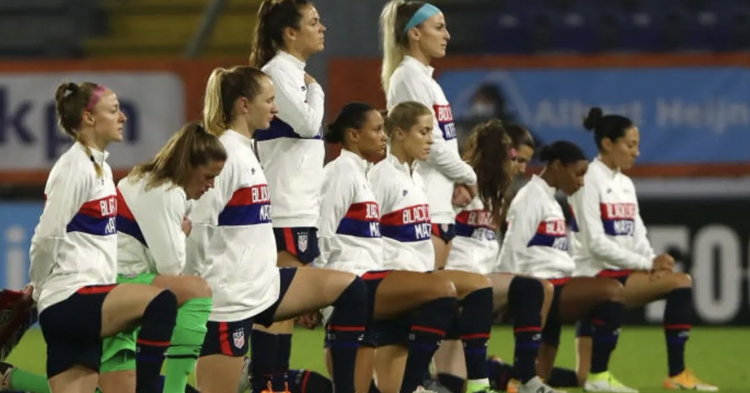 Millions watched as the women on the United States women’s national soccer team (USWNT) came onto the field ahead of their match with the Netherlands wearing jackets emblazoned with “Black Lives Matter.” The team had released a statement on social media that drew a lot of attention because it riled up those who see the Black Lives Matter movement as a political agenda rather than a civil rights campaign to end police brutality and racial injustice in America.

“We wear Black Lives Matter to affirm human decency,” USWNT wrote on Twitter prior to their game with the Netherlands. “We protest against racial injustice and police brutality against Black people. We protest against the racist infrastructures that do not provide equal opportunity for Black and brown people to fulfill their dreams, including playing on this team.”

In a subsequent teat, the team reconfirmed that their statement was “not political, it’s a statement on human rights.”

Team USA defeated the Netherlands 2-0. Before the game, several Team USA players knelt during the playing of the national anthem.

Megan Rapinoe, captain of the team, has been vocal in her support for human rights. She was among the first professional athletes to join former NFL quarterback Colin Kaepernick in kneeling during the national anthem to protest police brutality against Black Americans. Despite Rapinoe’s vocal support of the human rights agenda, the United States Soccer Federation has not been overly supportive of its players kneeling during the anthem to protest the issue.

After Rapinoe took a knee during the anthem, US Soccer tried to ban players from the following suit. They quickly realized that they were unable to force players to do anything and repealed the order as millions of Americans took to the streets to protest the violent police killings of unarmed Black people, including Breonna Taylor, Ahmaud Arbery, and George Floyd.

Last year, about a month after Floyd’s murder, Rapinoe joined a call on The Late Show with Stephen Colbert to discuss her support of the Black Lives Matter movement and why it was so important for America to get behind it.

“I think people are really getting it,” she told Colbert. “They’re like, ‘Got it. We can’t say all lives matter anymore because the all lives house isn’t on fire right now; it’s just the black lives right now.’”

Rapinoe believes the American public has gotten a lot stronger over the last four years after realizing that the people “have a lot more power than they’ve been told.”

Only a few months later, Rapinoe took aim at the gender pay gap.

She added, “The amount of money that [the women’s team players] could possibly earn in our contract — compared to the amount of money that the men could possibly earn in the contract — is very different. We’ve been very successful … and to get paid about the same dollar-for-dollar amount [as the men] — that’s sort of at the heart of pay inequity and gender discrimination.”