Utility Worker Leaves “Terrifying” Note In Man’s Yard After He Couldn’t Do His Job. 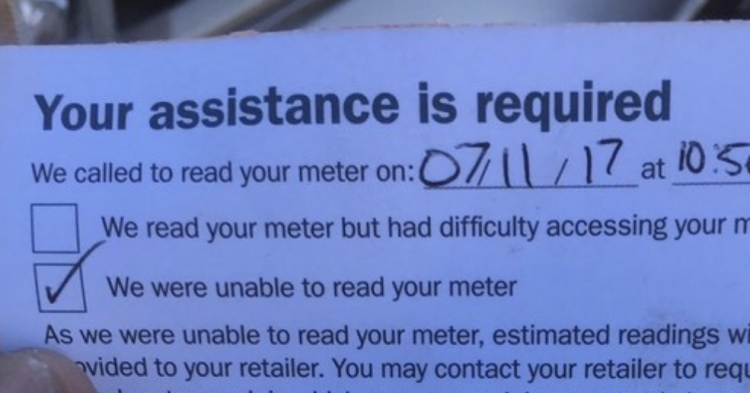 Ian Trevethan had no idea that an employee from Essential Energy was coming to his house to read the electrical meter. But when Trevethan found the note left behind alerting him to how the meter reader didn’t do the job, he read it very closely to get all the details. When the meter reader revealed the real reason why he was not able to complete the simple job, you will have to forgive the employee because doing the job might have cost him his life.

After receiving the note, Trevethan decided to share a picture of the note on social media. It alerted him that “your assistance is required” and that “we called to read your meter on 07/11/17 at 10:56 am.” 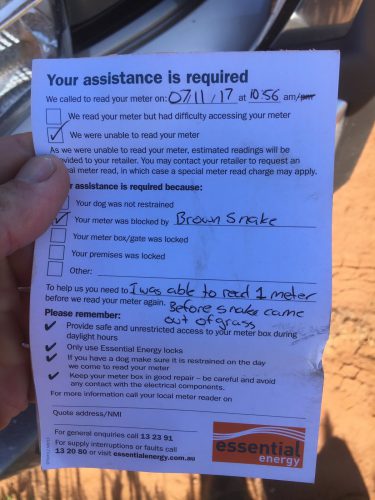 The Essential Energy employee checked off a box indicating that Trevethan’s “assistance is required because… your meter was blocked by a brown snake.”

If the meter reader had pushed through the unexpected obstacle, he or she could have died from the snake’s venom if it managed to bite.

The employee added, “I was able to read one meter before snake came out of grass” and threatened his life with its venomous bite.

The homeowner shared the picture of the note along with the following caption on Twitter: “Found this note on the meter box this morning. Only in Australia.”

Within a matter of days, the post was liked by hundreds and retweeted to many other accounts. Many people chose to focus on the humor of the situation. For example, although a snake scared away the utility employee, the company is sure to still supply a bill to the Australian customer. 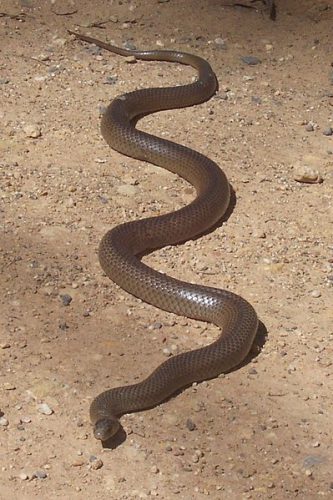 “Brown snake scared off the meter reader, but I’m certain the bill will still arrive.”

This same person joked that maybe Trevethan should use brown snakes to scare away more bill collectors so he could keep more money in his account rather than paying it out for his utilities or rent.

“I’m going to train him to lay in front of the water meter next. Might be able to hire him out,” he wrote.

Another person pointed out that Trevethan was lucky that the snake scared away the meter reader.

“Sounds like a way to stop the lazy b*****ds driving over my front lawn to get to the meter box and save on the power bill.”

Although it would have been awesome for the employee to snap pictures of the deadly snake, Essential Energy told Daily Mail Australia that the employee did not have time to take snaps of the dangerous reptile. Because the snake posed a health and safety concern, he had to get out of there as fast as possible. Therefore, he fled the scene, wrote the note, and left without getting a close-up of the brown snake.