VIDEO: A Boy Got In Big Trouble At School For Defending Himself From Girls Who Were Attacking Him : AWM

VIDEO: A Boy Got In Big Trouble At School For Defending Himself From Girls Who Were Attacking Him 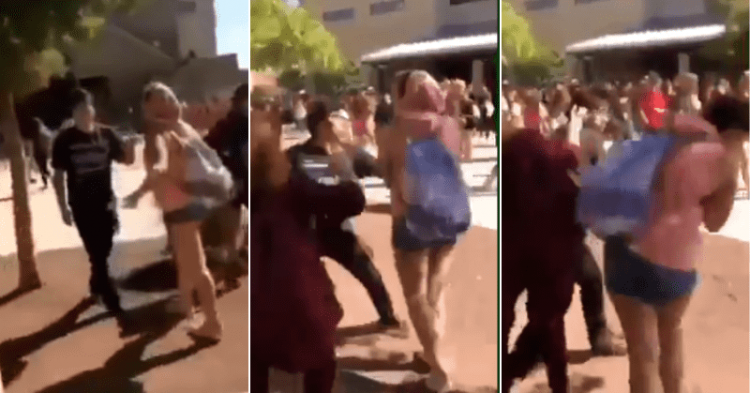 When a girl started harassing a boy at school, the victim started defending himself. But because he was a boy and she was a girl, the school did not like the fact that he used physical measures to fend the harasser off of him. As a result, a fight broke out showing the girl harassing the boy on school grounds and the boy responding in a way the administration found inappropriate – now, the boy has been suspended.

The video of the co-ed fight shows the girl initiating the altercation with the male student. At the start of the clip, the girl is yelling at the boy and then throws the first punch. Because the boy did not want to be hurt, he put up his hands to defend himself and tried to escape her onslaught. However, the female student did not give up her attack on the boy and continued to come at him.

When the boy tried to block her attacks, the girl screamed: “don’t touch me.” Because of this key phrase, she managed to turn the fight into something it was not, and this riled the boy up even more. Eventually, he lost control of himself and struck the girl across the face.

Because the boy struck back, a friend of the girl’s rushed into the fight and tried to hit back at the boy. This is when the fight escalates and quickly gets out of hand. Fortunately, people intervene around this time and stop the fight from becoming a brawl.

The video shows that while the boy was being harassed, no one came to his physical defense. But as soon as he attacked the girl, bystanders rushed in to enact revenge. This shows that not only did the girl have a backup for the fight, gender stereotypes still prevail. This could not have been more evident in how the situation was handled once school administration took control. The boy was suspended while the girl only got a slap on the wrist.

The video was uploaded on Twitter, and supposedly, the boy in the video shared his side of the story.

“Basically, me and my friends talking and we hear her say that the school is dumb ass s**t for running a dance after the tragic we had this morning, and my friends said that the school could do whatever they want and she didn’t like that and she said that ‘everyone that goes to that dance need to get shot and put into a grave.’ And me and my friends were like this b***h crazy, and she started yelling at my friend, and I started to laugh, and she said she will ‘smack that smile on my face,’ and I said ok whatever and she said she will ‘you think I’m playing games?’ I continued to say whatever and she was like okay after class you will see. I said okay, and we got out of class, and I walked out of the 2000 building, and she said ‘hey p***y, where are you going?’ I then turned around and looked at her and then she started yelling in my face, and she started to get close to me, and that’s when the video started.”

Who do you think is truly at fault?

How everyone gon be mad at him??? If they didn't want him to eventually hit back they should've stopped it sooner 🤨🤦‍♂️ pic.twitter.com/M7Ymx1ETk0