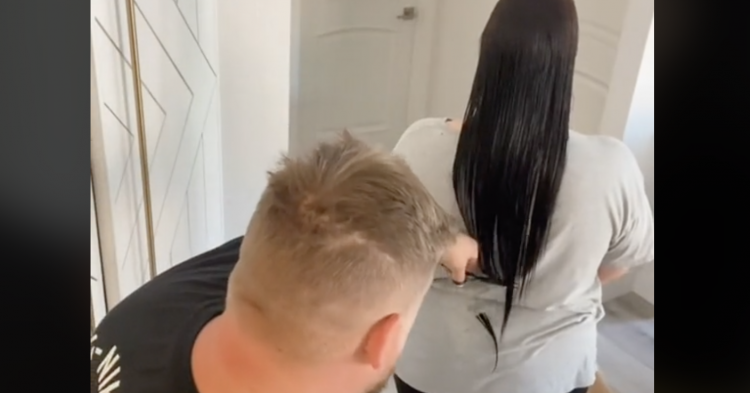 Paris and Cole are the type of couple that can weather any storm. Anyone who has watched their home DIY projects and tutorials on their social media channels knows them as the type of couple that will be together forever. But the couple recently went viral on TikTok for something completely different than what they usually do when behind the camera – and now the world wants to know more about Paris and Cole.

In addition to their work as a husband-wife design and décor team, they have turned their TikTok account into a content-producing hub for DIY videos and various home improvement tutorials. However, the couple decided to film a video for TikTok after Paris asked Cole to do a favor for her.

Paris asked Cole to cut her hair for her. It was the first time she ever took a chance at having him cut her hair, so the couple figured they might as well film it. Now everyone who has seen the video wants to know more about Paris and Cole and their life together.

“Well, this happened,” Paris wrote as a caption for the viral video. “Asked my handyman husband to cut my hair….”

Because Cole wanted to make sure he did a great job cutting his wife’s hair, he pulled out an old handyman trick that helped him do the job right. He carefully combed her damp hair to make it all straight, and then he took out something that his wife never expected to see during her haircut.

Cole took out his large, yellow level. This device is typically used to make sure things are straight. However, Cole decided to use the construction tool during his wife’s haircut to ensure that he cut a straight line for her. However, Cole’s trick might not have been as silly as it appeared. It actually did work, and his wife was pleased with the results.

“Nailed it!” Paris wrote about the results of her haircut with her husband.

Before long, the couple’s video garnered more than a million and a half views. Most people applauded the couple for sharing their tender moment on the Chinese-created social media platform and contributed hundreds of comments about the video, including their reactions.

“Is he taking appointments?” another joked.

“The way he holds the scissors…” someone added. “He already has experience.”

“Nice job! That song made me think he was going to mess it up,” wrote one viewer.

“The fact he put this much effort in is beyond applause-worthy.”

One woman wrote that “I get my husband to cut my hair for me. He always does a great job, lol.”

“He leveled it for sure,” wrote one user.

Another person commented, “My husband did this during quarantine! It always turned out great.”

“This isn’t his first Rodeo,” wrote one observant viewer. “He holds his scissors professionally.”

What do you think about this DIY haircut from Cole? Should Paris trust him to cut her hair again?