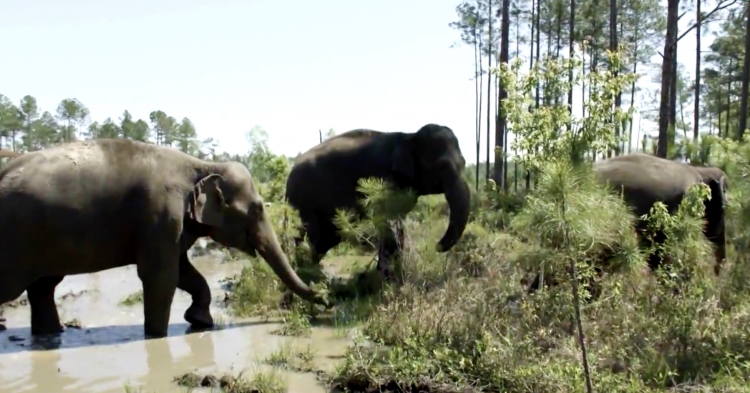 In 2017, The Ringling Bros. and Barnum & Bailey Circus’s 146-year history came to a crashing halt. After 146 years touring the country and inspiring audiences everywhere, horrible allegations of animal abuse started to spread, and the circus could no longer maintain its façade of entertainment. As a result, the circus closed, and the animals that had only known life in the circus were brought to sanctuaries where they could finally experience the freedom they deserve.

Now, thirty former circus elephants have been relocated to an animal sanctuary in Florida. These elephants, which include animals of all ages from eight to sixty-three, from calves to grannies, not get to experience life outdoors. Their situation is much better than it was when they were stuck performing for ticketed customers who came to see the circus.

The elephants are now under the care of wildlife refuge philanthropists Mark and Kimbra Walter. With these thirty new elephants in their Florida sanctuary, the location is now home to one of the largest herds of elephants in the Western Hemisphere.

The location of the sanctuary is just south of the Florida-Georgia line in Yulee. With acres of land, the elephants have a lot of space to explore and live life undaunted by the troubles of their circus pasts.

When CBS Miami ran a report on the release of these thirty elephants, dozens of people replied with comments on YouTube. The following is a selection of thoughts from viewers across Florida and other parts of the United States.

“Elephants are intelligent, gentle giants that deserve to be safe & happy. This makes me very happy!”

“So happy these magnificent animals are living the life they truly deserve.”

“I can’t stop cheering this action!!! God bless them and their carers!!! BTW, this is the best report I’ve seen yet, thanks!”

“I don’t want any public tours. I’m happy with footage like this. Or nothing at all,  just the knowledge that the elephants are safe and happy. Give them their privacy, like we all want and enjoy.”

“I am so happy that these Ellies are free. They were horribly abused by Barnum and Bailey! They were hit all the time! Good to see these elephants just being elephants!”

“This is like night and day for these elephants considering the life they had to endure and suffer. So happy for them in their natural world, enjoying the freedom and each other. Thanks to all involved who got them to White Oak Conservation.”

“Retirement well deserved for those peaceful giants. Their best times are ahead of them.”

Some people wished that sanctuaries like this did not have to exist.

“The best way to treat a wild animal is to never take it from its known environment/home. Leave them alone.”

Others believe the sanctuary better try to breed the elephants.

“As long as they allowed to breed. Elephants are a critically endangered species, especially the Asian elephant. Any roadside zoo or ‘so-called sanctuary’ that doesn’t breed should have the elephants taken off them immediately.”

What do you think about these thirty elephants finally finding peace at an animal sanctuary in north Florida?