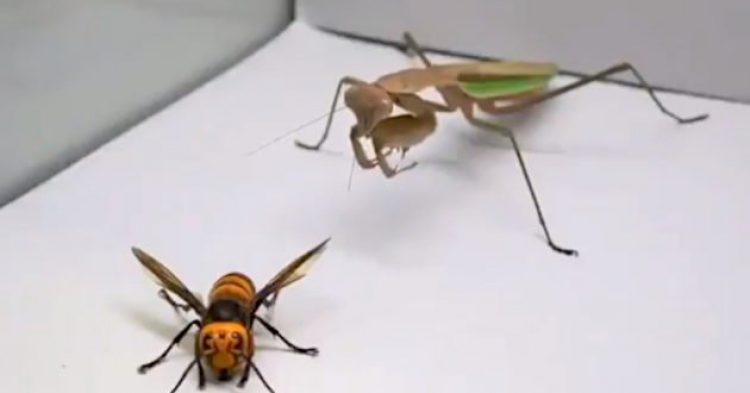 Although it might be called the murder hornet, this beast, which is the largest hornet in the world, doesn’t stand a chance against one common enemy. Even while the world is reeling from the COVID-19 pandemic, people were unable to turn away from this alarming footage of a murder hornet going toe-to-toe with a praying mantis. Because the hornet is about two inches long, which is big enough to scare the living daylights out of half of all Americans, people were delighted to see that even a beast nicknamed the murder hornet could meet its match against the common praying mantis.

A murder hornet is a killing machine. Its jaws are ferocious and powerful. But its sting can be deadly. The venom contained in it contains a deadly neurotoxin that has the power to kill up to fifty people per year. And while most bees can only sting once and then they die, the murder hornet can sting again and again, making it even more dangerous and deadly. If you have a sensitivity or an allergy to its venom, then you could easily die.

It was not long ago now when the murder hornet burst onto the internet scene with video footage showing it killing a mouse. That’s right. This hornet is powerful enough to kill a mouse, which should worry you. Not only is the mouse a mammal with a beating heart, but it is also much larger than the murder hornet. Nevertheless, the flying insect had enough power in its two-inch body to end the mouse’s life.

While many Americans call this beast the murder hornet, it’s true name is “Asian Giant Hornet.” The insect earned its killer nickname after it was discovered in parts of Japan. Now the giant hornet is spreading across North America – and may soon be invading your community.

Footage of this animal battle was uploaded to YouTube and attracted more than a million views in a matter of days. People are very interested in seeing the murder hornet meet its match in the form of a praying mantis.

People shared hundred of comments about the footage, including the following ones.

“If anyone kills a praying mantis,  it should be considered a felony.”

“The mantis can hunt small birds and frogs, so this isn’t surprising.”

“If you are freaking out right now about the Murder Hornets in the US… Don’t be afraid of the mantis… they are our friends in this situation and don’t have a venomous sting or bite.”

One fan wanted to leave you with a business opportunity: “We need to breed more mantises. They’re our only hope.”

What do you think about the footage?