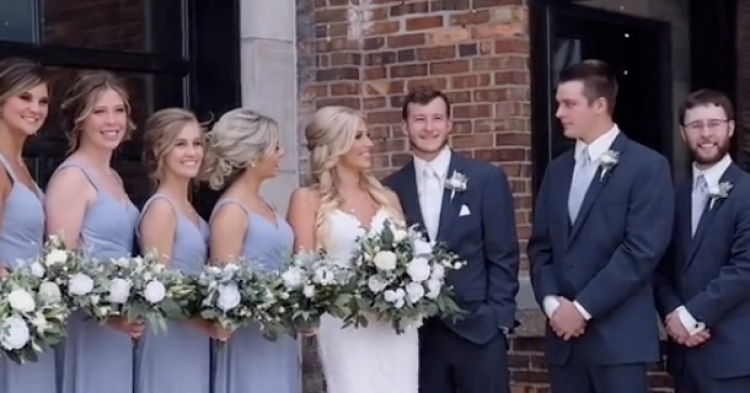 The clip was uploaded to the Chinese-created social media website by John Pattyson, who prides himself in sharing behind-the-scenes footage from weddings across America. On his TikTok bio, he writes that he loves “first looks, dancing and when grooms cry” at weddings.

Everyone at the wedding must have felt very awkward after hearing the names “Corey and Taylor” on the day of Corey and Katelyn’s wedding. Because Corey had a juicy past with Taylor – which the wedding photographer knew nothing about – the bride could not help but think of the images of her soon-to-be husband in the arms of his former lover.

“The couple,” Katelyn corrected the photographer after the person made the same mistake twice. “Just say the couple.”

The wedding photographer’s mistake became such a hot topic that Newsweek contacted Katelyn for an interview about the mix-up.

“At first, I was like, ‘did she really just say that name? out of all the names she could have chosen!’ I just laughed it off and didn’t think of it being that big of a deal,” Katelyn Love told Newsweek. “I honestly forgot it happened until I saw the video on TikTok. It was my dream wedding, so I wasn’t going to make a little mix-up like that ruin my day.”

Pattyson confirmed that the photographer was not talking about the groom’s ex-girlfriend when she said the name, Taylor. Instead, she was simply using the name of the bride from the event the week before.

“It’s definitely an easy mistake to make, and the bride was totally forgiving. At her last wedding, the bride’s name was Taylor, so I get it can happen. Just bad luck with the name being what it was,” he said.

“The reaction was delayed at first, but then the wedding party all reacted since they knew all about it. It was definitely a good laugh,” said Pattyson. “I think If it had only happened once, I wouldn’t have made a clip of it, but with it happening a couple of times, it was definitely memorable. All in all, though, purely a coincidence and honest mistake.”

What do you think about this wedding photographer’s mistake? Do you think the bride handled it well, given the name belonged to her lover’s ex?