When I Realized What This Map Was, It Made Me Scared For 2020 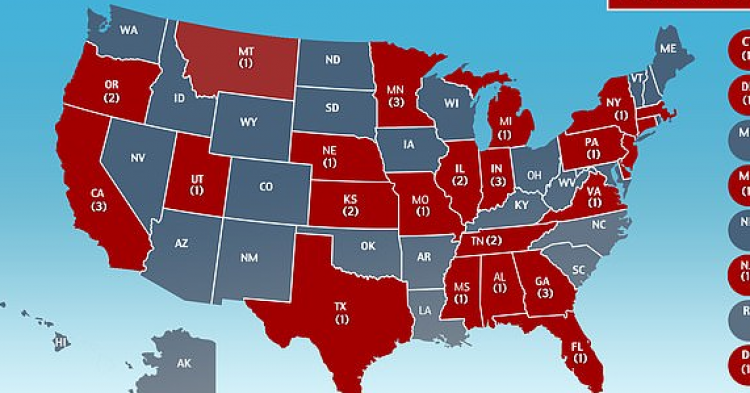 Usually, maps with blue and red states are a signal to the political affiliations of each state. But when you see a map of the United States where liberal states like New York, California, and Massachusetts are red, then you know that this is not a normal map delineating the political divide of the country. That’s because this map is not political at all – it simply shows the number of people who have died from vaping across the country.

Now officials have come forward with the horrifying statistic that 37 people have died across 24 states and the District of Columbia from vaping. While dozens of people have died from the “cool” alternative to smoking, 1,888 cases of lung illnesses have been confirmed across the entire country, not accounting for Alaska, which is behind in its data.

While tobacco manufacturers marketed their e-cigarettes to youth as a “healthy” alternative to smoking cigarettes, the lies are now apparent. Vaping causes lung damage, but the exact details are unclear since there are so many types of e-cigarette products out there. Some designs included metals and toxic fumes in their design.

Most vaping victims are under the age of thirty-five, which should come as no surprise. E-cigarettes were marketed heavily toward youth in the United States, including those who are under the legal age of consent.

Because vaping kills, experts from the Centers for Disease Control and the US Food and Drug Administration and state health departments are working around the clock to find out what exactly is killing people across America.

Many victims reported using THC vapes, which has led investigators to start there as they hunt for the cause of the deaths. THC is the main psychoactive ingredient in marijuana.

Eighty-six percent of vaping victims reported using THC pods, but experts have not ruled out the dangers of vaped nicotine yet. Because teens and young people are the primary victims, officials recognize that manufacturers are marketing their products, often illegally, to the younger demographic.

Because of all the deaths, e-cigarette company JUUL announced that it would quit selling dangerous flavored pods like creme brulee, cucumber, mango, mint, and fruit.

Meanwhile, states are taking action to protect their citizens. Places like Rhode Island, Utah, Washington, and New York enacted temporary bans on flavored vaping products to keep residents safe and sound. However, Massachusetts banned all vaping products, flavored or not.

President Trump wants to use his authority as president to pull flavored vaping products from the market. No action has been taken yet on the federal level.

Experts worry that the liquids in the vaping solutions are causing lung problems. That’s because manufacturers load these with cheap oils that get vaporized and potentially damage the lungs.

Do you think Trump should ban all vaping products?