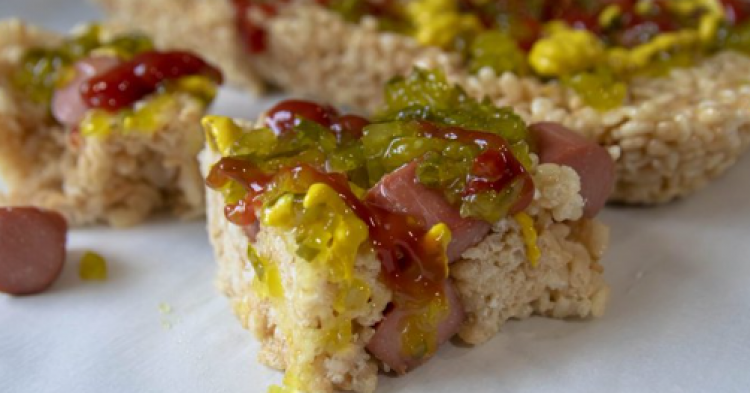 “White people,” a self-proclaimed “excessively-Black” Twitter user wrote to caption a viral Twitter video recipe featuring hot dogs covered with a layer of rice crispies treats. “What the hell have you unleashed upon the world?” Millions of people are shocked that this new food trend is sweeping across America as social media users on Instagram and TikTok (which is Chinese-owned and operated) share videos featuring themselves creating hot dogs mixed with the popular dessert item that has gooey marshmallows mixed in it.

These disgusting treats were first proposed online by The Vulgar Chef. While the origin of the rice crispies treats wrapped hot dogs is not entirely certain, it appears that the Vulgar Chef, whose name seems to match the recipe in question, is the person who first created the disturbing combination of savory hot dogs and sweet rice crispies treats.

In the video included below, you’ll see how to make these rice crispies treats hot dog delights. While many people feel that they are not a good choice when it comes to a hearty meal, there is a segment of the population that actually gets pleasure out of eating hot dogs with this sweet treat wrapping.

First, you need to melt your marshmallows. Drop the puffy white clouds of sugar into a pan and then heat over medium heat until they are melted into an ooey gooey mess. At this point, pour in your rice crispies cereal. You’ll want to make sure you add enough cereal so that the melted marshmallows can cover up the cereal pieces with their gooey substance. Stir the cereal into the melted marshmallows until it is well-mixed. Then set it aside and get to work on your hot dogs.

First, you need to cook your hot dogs. In the video, the “chef” boils the hot dogs in piping hot water. Allow the hot dogs to cook to the doneness that you prefer. Then remove them from the boiling water. Grab a knife and slice the hot dogs into one-inch cylindrical pieces. Then add the hot dog pieces to the cereal and marshmallow mixture. Mix in the hot dogs until they are evenly spread out throughout the gooey treat.

Place the hot dog rice crispies treats into a glass baking pan. Then put it in the oven for a few minutes or until the marshmallows have hardened the baked good into a solid block. When it’s done, remove it from the oven then cut your pieces out.

The video also suggests a way to garnish your hot dog rice crispies treats. They use a lot of Heinz relish in the video, covering the entire baked platter with the green stuff. After spreading the relish around evenly to cover the entire dish, the chef then adds a letter of mustard followed by a layer of ketchup.

Do you think hot dog rice crispies treats are something you’d want to try out in the kitchen?

What the hell have you unleashed upon the world? pic.twitter.com/5JkUX5q87R