When The School Asked Her To Cover Up Her “Revealing” Dress, They Didn’t Expect The Backlash : AWM

When The School Asked Her To Cover Up Her “Revealing” Dress, They Didn’t Expect The Backlash 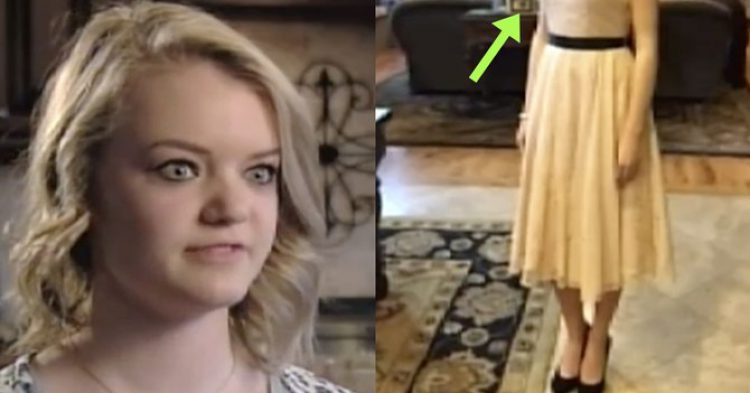 When Gabi Finlayson found the ideal dress for her Preference Dance, she got all dolled up and left home Saturday evening to attend the event at Lone Peak High School. However, things did not go according to plan. Shortly after Gabi appeared at the dance venue, a conservative school representative gasped and came right up to the young girl, demanding that she cover up because Gabi’s shoulders were exposed.

Gabi was stunned. She thought she looked lovely in the dress and that it met the school dress code. The school representative made it very clear that Gabi was dressed inappropriately and that she had better cover up with a shawl or something or she’d be booted from the dance.

The entire thing humiliated Gabi. Not only did she get separated from her group, but she also had to attend the dance in a coat, instead of being able to show off the dress she had bought for the occasion.

Gabi was “embarrassed” and felt like the victim in a targeted attack. Gabi started to question why she had to cover up in the first place. She was attending a school dance on a Saturday. She wasn’t showing up to class in the dress. Besides, the dress was not even revealing. It only showed her shoulders. That’s when Gabi started to get furious. Not only was she wearing a winter coat to the Preference Dance, but she was also being punished because her shoulders might drive boys crazy.

“Somehow, my shoulders are sexualized,” Gabi said. “Like it’s my responsibility to make sure the boys’ thoughts are not unclean.”

During the dance, four students of 1,200 in attendance were asked to cover their shoulders. None of those students were male.

The school principal, Rhonda Bromley, has defended the school’s conservative dress code and said that students should have known they’d need to cover up. Exposed shoulders were strictly against the rules.

The school dress code states: “Formals, backless dresses and/or tops may not extend beyond the bottom of the shoulder blades. Girls’ dresses and tops must have a 2-inch minimum strap on each shoulder. Shawls, boleros, and other shrugs are acceptable if worn over the dress at all times. Cleavage covered.”

Gabi had purchased the dress while visiting Paris and was excited to be the zenith of fashion at the school dance. Instead, she felt embarrassed and looked foolish because she had to wear a winter coat while the other girls got to be in their formals.

“There were a lot of dresses that were very short, very tight. A lot more exposing or revealing than mine,” Gabi complained.

Gabi was not the only person who was furious. Her mother, Kristy Kimball, was equally outraged, if not even more so.

“How have we gotten to the point that we look at shoulders as if they’re somehow p*rnographic? As if they are this shameful thing?”

Do you agree or disagree with the school dress code?