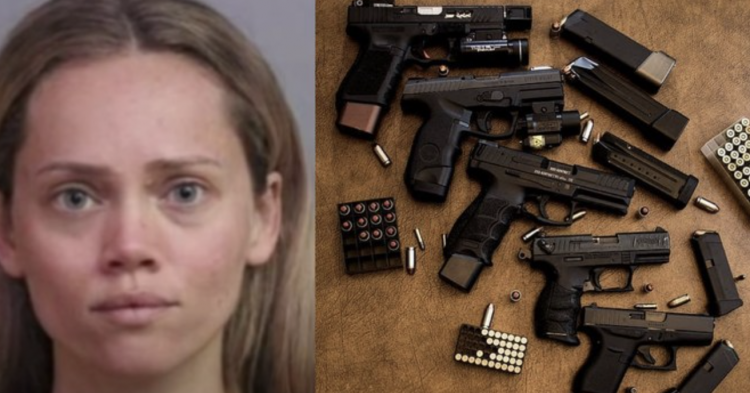 In Florida, a woman was arrested after she brought her estranged husband’s guns to the police. Although she was turning in the guns to help promote safety in the Lakeland community, police decided to arrest her for her good deed instead. According to an arrest affidavit, Courtney Irby was arrested on charges of grand theft of a firearm and armed burglary for her role in turning in her estranged husband’s arsenal of firearms.

Because Irby’s husband, Joseph Irby, confirmed that he wanted to press charges against his wife, it is possible she could be facing some serious prison time. According to the heavily armed husband, his wife did not have permission to enter his Lakeland apartment, where she obtained his firearms and brought them to the police.

Although it was against the law for Courtney to take her husband’s guns and bring them to the police, she only did so because she was afraid of the man. There had been an aggressive incident the week prior at a courthouse when Joseph tried to use his vehicle as a deadly weapon.

“(He) followed behind her in his vehicle and began ramming his vehicle’s front bumper into the back of the victim’s rear bumper. He then began screaming and yelling at her,” the affidavit read.

Police arrested Joseph Irby on the charge of domestic aggravated battery with a deadly weapon. Because Courtney knew that he was a dangerous man, she broke into his Lakeland apartment while he was in jail and confiscated his arsenal of firearms.

When she was turning over the weapons to the police, the officer asked her, “So you are telling me you committed armed burglary?”

Lakeland police have since come forward to defend their arrest of Courtney after she was trying to do a good deed for the people of Lakeland.

“We have to safeguard every citizen’s rights. When a case is brought to us, we have to look at all sides of the cases and come to the fairest conclusion we can for everyone involved,” Lakeland Police Chief Ruben Garcia said, following an outcry on social media after her arrest.

Chief Garcia told 8 On Your Side that he and his officers were not aware of any previous incident when responding to a call to Irby’s home. However, the wife alerted the police to the fact that Joseph was a dangerous man. She had taken out multiple restraining orders against him, including while he was arrested for attacking her.

“We’re grateful for the support that she’s gotten. This has been one of the toughest things she’s ever had to do. She’s strong, and she has a lot of love. We’re there for her whatever she needs,” Haley Burke, Courtney’s sister, told 8 On Your Side.

“It’s such a fine line when you’re in fear of your life,” Dr. Linda Parker, director of victim services at Peace River Center, said. “We do live in an area where you can have a license to carry. We really encourage our survivors to talk to police, talk to authorities to let them know that’s a palpable fear.”

Do you think Courtney Irby should have been arrested for turning in her husband’s guns?