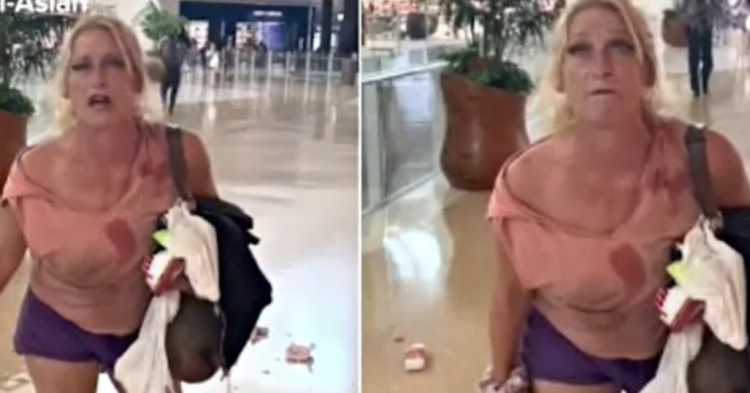 There’s an up-and-coming mall in Las Vegas that has made it into the headlines for all the wrong reasons. During the incident at The Shops at Crystals located in the CityCenter complex, a woman was caught hurling racial slurs at a small Asian boy and his mother before she punched the six-year-old. Fortunately, the TikTok user, UhmMajo, who uploaded the video of the woman going on the racist tirade, managed to capture the tail end of the attack and get it out into the public so other people could rush to their aid.

“This woman attacked my son. She punched my 6-year-old while yelling racist, anti-Asian things,” @uhmmajo wrote in the viral TikTok video.

She captioned her viral post with: “I hope the cops picked her up. Mall security just let her go. Yes, we are pressing charges.”

The video begins with the blonde woman yelling at the mother of the Asian boy. The white woman looks furious and at her wits’ end as she hurls foul language at the mother-child duo. During the clip, the mother of the victim confirmed that the event occurred at a “luxury mall.” She ended the clip showing the mall security officer confronting the enraged woman as well as offering viewers the advice to “stay safe. It’s not safe anywhere.”

During the tirade, the angry woman can be heard shouting the word “China” in a derogatory manner. She also stoops to pick up her belongings that had gotten scattered across the floor as a result of the interaction.

Racist anti-Asian behavior has been on the rise in the wake of the COVID-19 pandemic. Because the coronavirus first emerged in Wuhan, China, some people have begun to blame Asian people for the virus. While the virus has since spread across the world and affected billions of people, it was merely a coincidence that the virus emerged in China.

“[Asians] particularly face more racism during periods of pandemic, periods of war, and periods of economic downturn. Last year we experienced three things,” said Dr. Russell Jeung to NBC Los Angeles. Jeung serves as a professor of Asian-American Studies at San Francisco State University. “We had the pandemic. We had economic distress because of the pandemic. We had a US-China cold war. So those three factors are just the perfect storm conditions for racism to occur amidst those conditions.”

“My research focus was on religion and justice. It wasn’t particularly on racism,” Jeung said. “But I just knew at the [start of the pandemic] that someone’s got to start tracking it.”

“It’s just not a position I want to be in, having to document hate,” he said.

As more white Americans see and interact with Asian people, the incidents of racism go up.

“As more of the public is interacting and interfacing with Asians, we’re seeing a continued rise in racism,” Jeung said. “It makes sense because there’s all this pent-up economic distress, there’s pent-up anger over the quarantine. There’s still the continued scapegoating of Asians for the disease.”

What do you think about this anti-Asian incident?

I hope the cops picked her up. Mall security just let her go. Yes, we are pressing charges. ##crystalsmall ##arialasvegas ##fyp ##assault