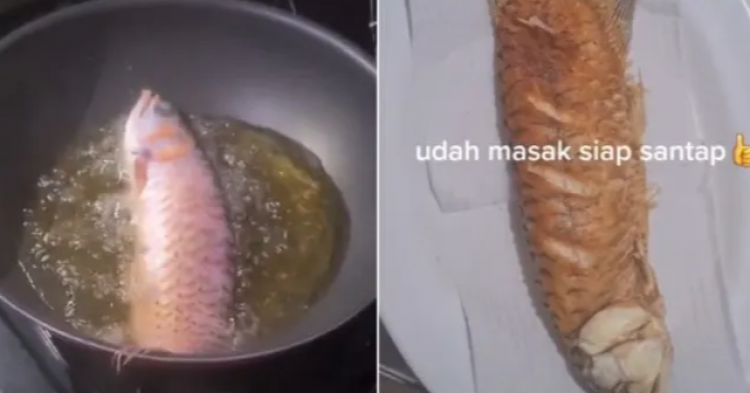 Mia Kurniawan, of Indonesia, wanted to teach her good-for-nothing husband a lesson. The woman, who posts content on the Chinese-created TikTok platform, shared a video showing how she scaled and cooked her husband’s lucky fish as retaliation. Because the man continually failed his wife, she decided to show the world how she scaled and seasoned the freshwater fish before dunking it into the deep fryer to cook.

The video may only be about twenty seconds long, but it has captured the imagination of users from across the globe, including in Indonesia and in the United States.

In the video, the scorned wife said, according to AsiaOne.com, “My husband kept promising to clean the aquarium after I told him to. I thought it would be delicious if I fried it.”

She flashes the camera a “heart” gesture before turning off the clip. Accompanying text on-screen states, “Already cooked and ready to eat.”

The fried fish was particularly shocking for social media users because the woman fried the husband’s lucky fish. The Asian Arowana, which is sometimes also known as a dragonfish, is a symbol of prosperity and wealth. The husband kept the special fish around because he thought it was a good luck charm.

The fish, according to AsiaOne, is beloved by people across countries like China and Japan because of its glimmering scales. When people buy this fish, it can sell for as much as $300,000, according to some estimates. So that means that if this woman really did cook her husband’s dragon fish, it might be the most expensive meal of his life.

The Asian Arowana is a very rare animal indeed. According to the International Union for the Conservation of Nature Red List, the dragonfish is an endangered species. That means that those who own the animal likely need to have a lot of money on hand to keep it safe.

This wife knew how to pull a prank on her husband. If she indeed did scale, season, and fry his Asian Arowana, then she served up the most expensive meal of the man’s life – and it probably wasn’t even as appetizing as another fish could have been.

It is not clear how the person in the video got her hands on the rare animal. It was banned from international trade back in 1974, so it is very hard for people to get their hands on it. Nevertheless, she refused to hold back when teaching her husband a lesson. By cooking his rare fish, she made sure he would never forget the thing she wanted him to remember.