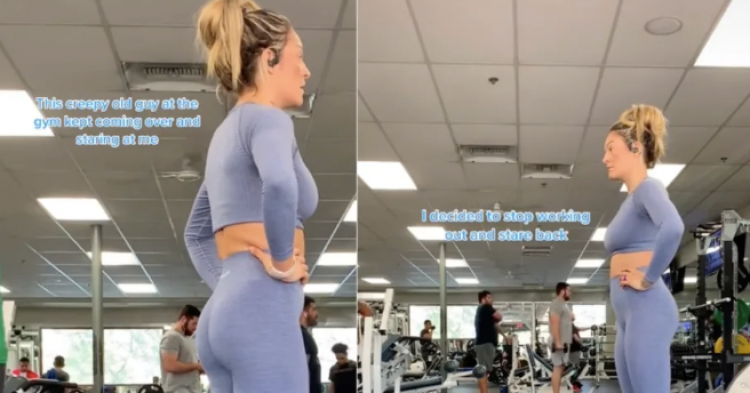 Heidi Aragon loves hitting the gym to work on her body. As an attractive woman, Aragon must confront the constant attention from various men and some women who also frequent the gym. However, one man crossed the line during her gym session on Tuesday when Aragon caught him staring at her. As a personal trainer, Aragon spends a lot of time at the gym working out solo as well as working out with her clients – but this creepy old man who kept watching her while she worked out soon became the subject of a viral TikTok video created by the young female personal trainer.

The footage captures the creepiness in action. As Aragon works through a set of exercises, a man in a green shirt was working out near here. But he wasn’t focusing on his own workout like he should have been. Instead, the man was watching her complete her workout when he should have been focusing on making his own muscles stronger with each repetition of the exercises. 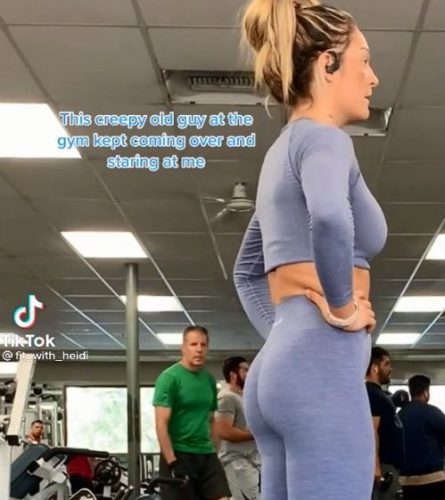 Before confronting the man directly, Aragon tried other things to get him to stop staring at her. She stared back at him and even had her husband working out nearby. Neither of these interventions was effective at keeping the creepy old man from staring at her body while she worked through her exercises at the gym.

“Don’t sit there and tell me you’re not doing something when I have proof,” she captioned the post.

Although she tried to teach the man a lesson, he didn’t seem to get it. Instead, she knew that she would have to confront him directly. So she decided to confront him verbally.

“I thought he got the picture, so I attempted to do my set. Then I got fed up and went over to address him,” she wrote. “I told him if he’s going to work out in this corner, he needed to stop staring and making me uncomfortable.”

The man denied staring at her and said he was “just looking around.” However, Aragon, who records her workouts, told him that his ogling was caught on camera.

“I told him I record my workouts and have him on film,” Aragon wrote. “He shut up real quick.”

TikTok users were outraged that the man would be staring at the personal trainer in the way he was. They contributed numerous comments on her video about the outrage that occurred on her watch.

“The gym is supposed to be a judgment-free space,” one TikTok user commented. “She clearly just wants to work out in peace.”

“This is why I’m scared to work out at the gym,” another added. “I just do it in my room.”

“Some people go to the gym for the wrong reasons,” someone else wrote. “This is why I’ve never been able to enjoy the gym.”

“You did a good thing by confronting him,” added another. “These types of men only go to the gym to stare at women. I see it all the time.”

What do you think about this problem at the gym?

♬ Real As It Gets - Lil Baby