Woman Who Is “Embarrassed” By The Ring Her Fiance Bought Her Shames Him Online : AWM

After being together for eight, long years, the man finally found the gall to propose. When he got down on one knee in the traditional proposal, the woman, who is from the United Kingdom, was delighted. She loved the man she’d spent the last eight years with – and could not wait to see that ring he had picked that would prove to her just how much he loved her.

When the man popped open the ring box, which was big, the woman could not help but frown. The ring inside had the tiniest jewel on it that she’d ever seen in her life. After eight years together, she could not believe that this was the best the man could muster. 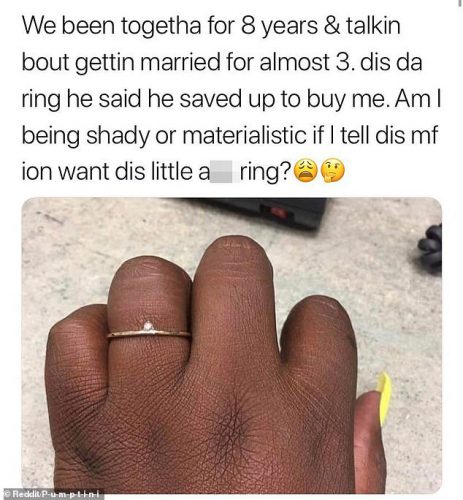 Despite the lackluster ring, the woman accepted the man’s marriage proposal. But she wasn’t happy about it. Since that day, the woman has turned to Reddit to complain about her fiancé’s poor choice in rings.

The bride-to-be was outraged when the man told her that he “saved up” to buy the “tiny” ring that she now has on her finger. After eight years together, the ring choice was an embarrassment to him and to her – but really showed that he suffered from an appalling lack of self-esteem.

In the Reddit post, the woman from the U.K. complained that she had spent the last eight years of her life with this man only to get such an embarrassing proposal.

“We’ve been together for eight years and talking about getting married for almost three. This is the ring he said he saved up to buy me. Am I being shady or materialistic if I tell this MF I don’t want this little a** ring?”

The tiny engagement ring is probably the smallest available for sale. It has a delicate band, which looks like it could snap in a gentle breeze, and is topped off with a tiny diamond fleck.

Many people shared their response about whether or not the bride-to-be should ask for a refund on the measly ring. Some were in favor. Others were against her complaining.

“I think I’d be more insulted to be given this ring than no ring at all,” one person said, echoing the bride-to-be’s complaint. “Like, just skip the ring altogether if you can’t afford it. That’s just embarrassing.”

Another person wrote, “That is the saddest ring I’ve ever seen. I’m not a materialistic person, but it just doesn’t even look good. She should talk to him if she’s unhappy with it.”

“It’s very dainty. I love dainty jewelry. But good Lord, that looks like if she makes a fist, it’s going to snap!”

“I kind of like her ring. It’s very modern and sleek looking. I’d wear that in a heartbeat.”

Although some people were in favor of the ring, the majority of people hated it and found it embarrassing. They think she should confront her cheap fiancé about it.

What do you think about the engagement ring? Should the bride-to-be be upset with how small it is?