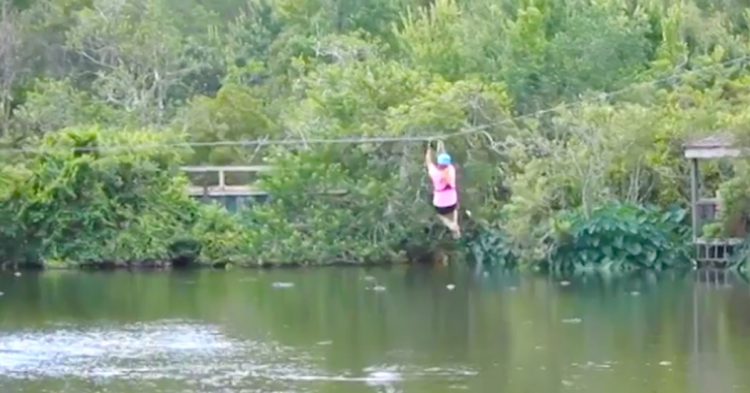 When I went on vacation to Costa Rica, my brother and I could not say no to zip-lining through the jungle. It was perhaps one of the most fun activities we did while in the Central American country. And while it is fun to take a zip-line course through the canopy of the tropical locale, it is also something that can be dangerous – as became abundantly obvious for one woman while she went zip-lining in the Australia of the United States – Florida.

Why do I call Florida the Australia of the United States? Simply because Florida is loaded with huge and deadly creatures. From snakes to alligators to disease-ridden armadillos, Florida is not a safe place if you plan on getting close to the wildlife.

However, this woman under-estimated how dangerous zip-lining would be. She believed the tour guides and did not think that her life would be in any sort of danger. But she was wrong. As became clear as soon as she got on the device, her life was not safe at all – especially when a Florida gator reared its ugly head and tried to snap off parts of her body.

As it turned out, the instructors on the zip-lining course built the line over an alligator-infested pond on purpose. It was their way of getting bigger thrills out of the experience. Although it was certainly very dangerous to swoop over a pond filled with hungry gators, these zip-liners did not care whether or not their lives were at risk – they wanted adrenaline, they wanted a thrill. And so they latched onto the zip-line and put their lives at risk.

Without a doubt, this is a terrifying experience. However, the woman did not seem to realize just how closely her life and limb were almost taken from her. If that alligator had been a bit quicker or able to leap a bit higher, it could have easily pulled the unsuspecting woman into the water and eaten her for breakfast. That would have been an absolutely bad way to go – alligators are not humane killers.

If you’ve ever considered going zip-lining, you should know that injuries have soared in recent years.

Researchers, according to NBC, found that zip-lining related injuries soared more than 50 percent between 2009 and 2012. And kids under 9 were the most injured, accounting for 45 percent of all injuries.

“One of the things that really struck us about this study is how serious the injuries were. Almost 50 percent of them were fractures or broken bones, and over 10 percent actually had to be admitted to the hospital,” said Tracy Mehan. “These are much higher and more serious injuries than we see with a lot of studies, and it shows us that this activity is much more like an adventure sport.”

Zip-lining can be fun, but it can also be dangerous. Be careful and make sure to lift your legs up if you’re zip-lining over an alligator pond.

Would you ride this zip-line?