Young Woman Parks In Disabled Spot, Finds Giant Insult On Her Car When She Comes Back Out : AWM

Handicap parking spaces make life easier and more accessible to those in need. Because people have to apply to get the handicap parking placard, they need to prove to authorities that they have a reason for needing access to the special parking spaces. Few people who get the blue placards do so to cheat the system and get a “VIP” parking spot while grocery shopping or running errands – they get the placard because they need it.

One woman had the handicap parking placard. She needed it as she went around town, running chores and doing what she needed to keep her household in working order. Although she had access to the parking places and had been approved by the government to get it, people did not always treat her kindly when they saw her pulling into those reserved spots. Despite the fact that she had the placard hanging from her rearview mirror, people still gave Julie a “who do you think you are” look. It made her uncomfortable, but it was not until recently when someone confronted her about it. 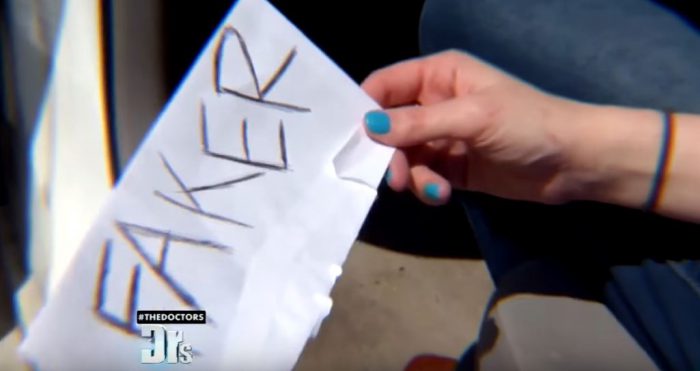 The thing is – Julie doesn’t “look” like she is handicapped. This recently led to one person writing a note and leaving it on Julie’s windshield so she could not miss it.

The note address Julie as a “Faker.” This accusation hurt Julie deeply for a very personal reason. She had been diagnosed with a debilitating disease that looks invisible on the outside. It is called postural orthostatic tachycardia syndrome or POTS. It’s a horrifying condition that results in drops in blood pressure that can simultaneously occur while her heart rate rockets up.

For eight years, Julie has struggled with POTS, and on the day that she saw the hateful note, her symptoms had been particularly bad. It was just the kick below the belt that she did not need – and it made her day even worse.

Because symptoms arrived randomly, having access to handicap parking spaces makes her life easier – and safer. There is less time for her to experience the symptoms and collapse to the ground in a busy parking lot if she can get to her car quicker.

When she saw the note, it made her feel terrible. She was angry and sad because she felt invisible.

“It was a moment of absolute defeat and frustration,” she admitted. “To once again be invalidated by someone who doesn’t know me and doesn’t know how hard I fight just to walk out to my car was another slap in the face.”

If dealing with the symptoms of POTS was not enough, this hateful person made her feel worse about herself and her life.

Julie was later invited to The Doctors to talk about her condition and what symptoms can be like. The hosts of the show wanted to educate the population about how not every condition can be seen. It’s best not to judge other people too hard without knowing their whole story, lest we make fools of ourselves.

What do you think about the note?